‘Street of the Day’ – a lockdown project looking at the streets in the area, their history and where their names originate.  Follow the series on Twitter @RoathHistory  or take a look at the Roads of Roath page our website.

Waterloo Road. Starts at heart of Roath, St Margaret, centre of the old village. There’s been a chapel here since the 1100s. First houses 1907. Named after the Battle of Waterloo 18/6/1815. Interestingly, one of the few remaining headstones in St Margaret’s churchyard is that of Sergeant Thomas John (d.1864) who took part in the Battle of Waterloo. I wonder if this had any bearing on the naming of the street. The road was also the childhood home of Michael Moritz, Wales’s richest (Google him).

Our December 2020 Newsletter has now been uploaded onto the website.

Our lecture programme is now delivered via Zoom.  Why not consider becoming a member and join us for our online presentations  (our members also receive the Newsletter a month before it is published on our website). It would be great to see you.

We wish all our members and friends remain safe at this difficult time.

One enquiry we had last year turned out to be ‘outside our patch’.  It was asking about a games shop in town, F.C.Parker. The enquirer was searching for a photograph of the original shop near the entrance to the Royal Arcade.  Unfortunately we weren’t able to help and they are still searching.  They have however put together an interesting blog post that may bring back some memories for some of you.

A piece of research has recently been completed into the men on the Western Mail Ltd Roll of Honour who fell in WWI.  Quite a few of them were from the area. 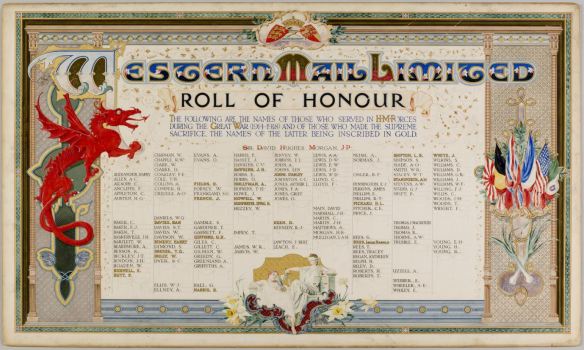 Of the 21 men who lost their lives they included:

Roath is a suburb of Cardiff, the capital city of Wales. Our area of interest is not just Roath as we know it today but all areas that were in the ancient parish of Roath.  That includes the suburbs of Adamsdown, Splott, Tremorfa, Pengam, Plasnewydd, Penylan, parts of Cathays and Cyncoed as well as Roath itself.

Our lively and interesting meetings are held at 7.45pm on the second Thursday of the month from September through to May.  See Programme for details.

Annual membership is just £10 and visitors are welcome to attend any meeting for £2.

In June and July we undertake a series of trips to places of historic interest in both Cardiff and the wider South Wales area.

We are now over 40 years old. More information on our activities can be found on the  Society page.

We have published a number of books about Roath history.  These together with links to other books of interest can be found on the Publications page.

On our Links page we have listed websites that ma be of interest to people studying local history in the Cardiff and surrounding areas.

In our Local History section we have started to assemble articles on a whole range of topics connected to the old parish of Roath.

Finally, we draw your attention to our Blog.  We hope you enjoy the posts and having a wander around the website.