Francis ‘Frank’ Wilberforce Gaccon was born on 6th April 1888.  His father was Watkin Gaccon, originally from Aberdare and a marine engine engineer.  His mother was Alice Charlotte Morgan originally from Overton, Gloucestershire.  Frank grows up in 96 Habershon Street, Splott where he went to Splottlands School and Cardiff University College (1904-11).  He followed his father into engineering.  During WWI he worked for Bute Docks Engineers and Shipping Company under the Admiralty fitting engines to lifeboats of hospital ships.   After WWI he started up his own successful company, Frank Gaccon & Co Consulting Engineer. Frank had a successful sporting career.  He played 105 times for Cardiff Rugby Club. He married three times and had one daughter.  When WWII was declared Frank joined Cardiff Auxiliary Fire Service and became Commander of the Cardiff A.F.S.  He was killed in Newport Road when a German bomb dropped on his car whilst on duty on 3rd March, 1941. He was 53 years of age at the time and living at 153 Cyncoed Road.  He is buried at Cathays Cemetery, Plot: M 948a.  He is remembered on a plaque in Cardiff Fire Station to those who died on duty.

William Geddie was born in May 1914 in Cardiff to William Geddie, a merchant seaman and Letitia Maud Geddie (née Walrond).  The family lived at 146 Kimberley Road, Penylan, Cardiff.  William was a Flight Sergeant (Wireless Op./Air Gunner) 76th Squadron in the Royal Air Force Volunteer Reserve.  He died on 17th Sept 1942 aged 28.  The memorial states that he died at Essen.  He is buried at Longuenesse (St. Omer) Souvenir Cemetery south of Calais in France (Plot 8. Row A. Coll. grave 10-13). He is remembered  on the Albany Road Baptist Church war memorial plaque.  Commonwealth War Graves Commission  page.   In a second tragedy to strike the family, another son Robert Geddie, aged 34, died in a cycling accident in 1950.

George Henry Gifford was born in 1883 in Manordilo, Carmarthenshire to Henry Stuckey Gifford, a coachman and butler, originally from Petherton, Somerset and Balbina Basteracha, a maid, originally from Busturia, Biscay, Spain. George was one of fourteen children born to Henry and Balbina. The Gifford family moved from Carmarthenshire to London, apart from George Gifford who moved to Roath, Cardiff and worked for the Western Mail as a compositor.  He married Amy Matilda Lovell in St Margaret’s parish church Roath in Aug 1911 and they lived at 40 Broadway.  They had two children together, Ernald Henry Gifford born in 1912 and Constance Margaret Gifford born in 1915. George enlisted first with the Monmouthshire Regiment and then transferred to the 13th Battalion, Welsh Regiment.  He was killed on 13 June 1918 aged 35, north of Albert, France, near today’s border with Belgium. He is buried at the Varennes Military Cemetery (grave III. G. 13).  He is remembered on the Western Mail Roll of Honour.  Commonwealth War Graves Commission record.  His son Ernald also worked in the media business becoming a sports journalist in London.  His parents, Henry and Balbina, were married for seventy years and both lived into their nineties.

Arthur Edward Gilmore was born on 4 Feb 1889 to Thomas George Gilmore, an engine driver for a tug company, and originally from Pill, Somerset and Mary Jane Gilmore nee Rodledge originally from Bristol.  Arthur and his twin brother Edward were the youngest of eight children and grew up in the Canton area of Cardiff.  Their mother died when they are just three years old.  In 1911 Arthur is living in the Clifton Hotel in Clifton Street and working as the resident barman. When war came he enlisted at Newport and eventually went to France with the 11th battalion South Wales Borderers in Dec 1915.  Has fatally wounded during the fighting at Mametz Wood. During the latter stages of the action his battalion, the 11th South Wales Borderers suffered grievous casualties during the hand to hand combat that marked their capture of the north end of the wood. Their ranks were then further depleted by heavy shellfire when they reluctantly withdrew after their flank was compromised by a German flammenwerfer attack. Arthur was 27 when he died from his wounds on 16 Jul 1916. His stepmother Eva received his effects but rejected the offer of a pension in 1920. He was laid to rest in Etaples Military Cemetery (grave XIV. A. 4A), with his sister Lillian providing the epitaph for his grave -‘His name liveth for evermore’.  Commonwealth War Graves Commission record.

William George Gregory was born on 12 Sep 1912 in Cardiff to William Garnet Gregory, an electrical engineer, and Edith Maud Gregory nee Hurley, both form Cardiff who married at Woodville Road Baptist church in Aug 1911. We don’t pick up William again until the 1939 Register when he is living at 107 Monthermer Road with his sister Edith and mother Edith who has by that time remarried to William J Davies, a retired police constable.  William Gregory is working as a warehouseman.  He was a member of Woodville Road Baptist church. Later he joined the merchant navy.  He served on board M V Conus, a tanker, as a ship’s writer. He died on 4 Apr 1942, presumed drowned, aged 28.  The Conus was part of a trans-Atlantic convoy which was attacked by torpedoes fired from U-boat 97.  All 59 crew were lost. He is remembered on the Tower Hill memorial in London as well as the WWII memorial plaque in Woodville Road Baptist Church. Commonwealth War Graves Commission record. 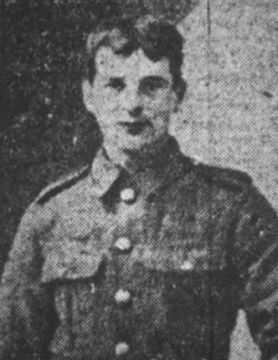 George Henry Griffin was born in Cardiff in 1891 to Samuel Griffin, a builder’s haulier, originally from Llanedarn and Sarah Jane Griffin nee Spencer from Cardiff.  He was christened at St Margaret’s church, Roath on 7 Aug 1891.  The Griffin family lived at 33 Elm Street, Roath. He joined the Devonshire regiment early in the war, went to France in Feb 1915 and was killed in action on 22 April  1915 at Zillebeke, Belgium, aged 24. He has no known grave.  He is remembered on the Ypres (Menin Gate) Memorial in Beligium.  He is also remembered on the WWI memorial plaque in St Edward’s church.  Commonwealth War Graves Commission record.