Although the illuminated Scroll lists those who served as well as those who died.  The scroll in an oak frame was originally placed in the CYMS Building in Richmond Road Cardiff.  When the premises was sold the memorial was placed in the custody of the St Peters Church, St Peters Street, Roath, Cardiff.

Those who died have been listed here:-

Details of the fallen will be added here:

Allan Edward Baker was born in Cardiff in 1899 to William Baker, originally from Southampton and an orchestral musician who worked for Moss Empires Co, the music hall company and Margaret Baker née Dodd originally from Liscard, Cheshire.  Allan was baptised at St John the Baptist church on 13 Jul 1899.  In 1899 the Baker family were living at 99 Bedford St but by 1911 had moved to 7 Bedford St, close to St Peter’s church where Allan attended the Catholic Young Men’s Society.  Allan served as a rifleman in the 2nd battalion Royal Irish Rifles in WWI.  He was killed in action, aged 18, on 23 Oct 1918 on the Western Front.  He is buried at the Harlebeke New British Cemetery, Belgium (grave X. A. 5). He is remembered on the St Peter’s Roll of Honour.  Commonwealth War Graves Commission record.

Denis Cummins was born in Cardiff in 1895 to John Cummins, a docks labourer and Catherine Cummins née Barry.  In the 1911 census Denis Cummins aged 16 is an errand boy. The Cummins family lived at 23, Oxford St, Roath.  Denis enlists in Cardiff and serves as a Private in the 2nd Battalion, Royal Munster Fusiliers. He was killed in action 18 October 1918 aged 23. Denis is buried Highland Cemetery, Le Cateau, France. (plot s19.11.18). He is remembered on the St. Peter’s RC Church, CYMS Roll of Honour.  Commonwealth War Graves Commission record.

Vincent Clarke Lashford was born on 9th Dec 1893 in Cardiff.  He was one of thirteen children born to Edgar George Frederick James Lashford, a commercial traveller selling fruit and potatoes, originally from Almondsbury, Gloucestershire, and Alice Mary Lashford née Parker originally from Reading.  The family lived at 122 Richmond Road in 1911 and Vincent worked as a clerk. In May 1912 he emigrates to Canada leaving Bristol and arriving at Montreal. He enlists in the Canadian Officers Training Corps based at the University of Toronto in 1917 and transferred to the Flying Corps at Fort Worth, Texas, later the same year.  He arrived in England at Easter 1918 but is killed in an accident on 30 May 1918, aged 24, on his last training flight prior to going to France. He was flying an R.E.8, a two-seat biplane out of Cramlington, which dived into the ground in Newcastle.     He is buried at Cathays Cemetery (section D, grave 1053).  He is remembered on a plaque below one of the stations of the cross in St Peters Catholic church in Roath, Cardiff, and the Canadian Virtual War Memorial.   Commonwealth War Graves Commission record.

Reginald Wolstan Lewis was born in the summer of 1900 in Cardiff to Frederick William Lewis, originally from Newport and an accountant in a coal exporting and ship broking company, and Elizabeth Anne Lewis nee Morgan, originally from Cwmbran. The family lived in some of the grand streets of the time, Stacey Road (1901), Connaught Road (1911) and at 49 Richmond Road (1918). He enlisted in Farnborough joining the Royal Flying Corps at 16 and became A.M.I. (Wireless) (service no.67748); subsequently joined 1st Reserve Battalion, London Regiment (Royal Fusiliers) C Company in Nov 1917 and then the later the 8th Battalion, Princess Charlotte of Wales Royal Berkshire Regiment.  He was killed in action on 24 Aug 1918 aged 18 on the western front in the Somme region of France and is buried at Bapaume Post Military Cemetery.  He is also remembered in St Peter’s church, Cardiff with a plaque below the XI Station of the Cross.  His parents also donated a Processional Cross to the church in 1922 in memory of their son. Commonwealth War Graves Commission record. 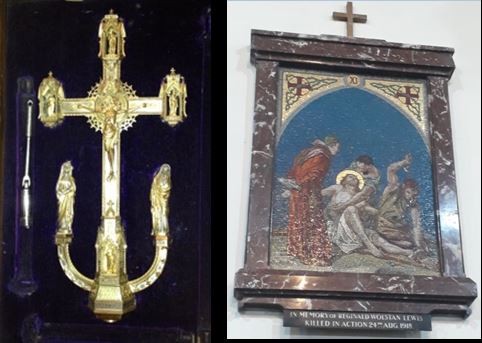