Going to the cinema used to be a popular pastime and there were a fair collection of cinemas in our area of interest i.e. Roath, Cathays, Splott and Adamsdown.

The 600 seat Cornet cinema in Woodville Road, Cathays stood on the corner of Basil Place.  It opened in 1913, with just a single floor and no circle. It closed in 1958 and was demolished in 1970 and the site was a petrol station for a while before being redeveloped for housing.

The Gaiety cinema on City Road opened in 1912 when it was called the Gaiety Grand Cinema.  The picture of the cinema in 1913 advertises the main feature as ‘Thor , lord of the jungles’ (1913).  In architectural terms it is described as having twin domed cylinders and central arcade flanked by  an Ionic colonnade.  It was initially able to seat 800 patrons and  thought also to have a roller rink at some stage.  It was re-modelled and enlarged with a balcony added in 1934 by architect William S. Wort and opened on 29th August 1934 with the seating capacity increased to 1,518.  An advertisement from 1948 shows it was part of the Splott Circuit of cinemas. From 1956 it became part of the Jackson Withers Circuit of cinemas.

The Gaiety Grand in 1913 not long after it had been opened.

Advert from 1948 showing the Gaiety as part of the Splott Circuit of cinemas.

The Gaiety Cinema closed as a in 1961 becoming a bingo hall under such names as Top Rank Hall and Mecca Bingo club.  The history of the club and pictures can be found on the Playing Bingo website  and David Lloyd’s memories as a caller.  The building ceased being a bingo venue in 1994. After closure as a bingo hall the building was unused for a while. Eventually it was re-modeled internally to two floors, for 10-pin bowling and bar/restaurant with many of the original features removed but the domes were restored.   The Spin bar and bowling opened in 2001 but closed for a final time on Sunday 12th February 2006 and subsequently deteriorated.

Through the years, the building changed hands many times.  In 2012 it was occupied by squatters and they renamed the building  Gremlin Alley Social Centre and daubed it with messages supporting the homeless.  Their plan was to turn the currently disused and run-down old bowling alley into a people’s project, a centre for the community to care and share alike their skills, hobbies, passions and pleasures together.  Presumably the group were evicted before their plans came to fruition.  A planning application to turn the site into a bar and restaurant was granted in 2013 but nothing has come of the proposals. Its distinctive twin domes are still in place but thought to be awaiting demolition.

Interior shots of the Gaiety. All were taken when the building ceased being a cinema but some of the original features probably remain (photo credits: 1. David Lloyd,  2-4 Leighton Parker).

The Gaiety revived as Spin bar and bowling but not for long,

Back in around 1913 someone had the foresight to look at the burgeoning population of Roath and the enthusiasm for silent movies and commission local architects Willmott and Smith too design a cinema building.

The Globe stood on the corner of Albany Road and Wellfield Road, where the Pear Tree pub now is.  It used to be called the Penylan Cinema, had a seating capacity of 542 and dated back to 1914.  In fact there is a reference to there being a cinema there as early as 1910 and called the Albany Cinema. The name the Globe derives from the fact the building used to have a globe sculpture on the roof. Look carefully at the old picture of the Penylan Cinema and not only will you spot the globe on the roof but also the two caryatids; Greek-like female sculpted figures acting as columns supporting the first floor.  These figures were later hidden behind boards advertising the programmes. It probably had a Wurlitzer organ too to accompany the silent movies.

The interior was attractively decorated in classical style with eagles and the initials ‘PC’ (Penylan Cinema) near the domed roof.  Windows in the roof could be opened for ventilation to allow out the billowing cigarette smoke

The cinema was renamed the Globe around the time it was rewired so that talkies could be shown in 1931.  In 1956 it was purchased by former Welsh rugby international  Rex Willis and operated with the Coliseum on Cowbridge Road and the Rialto in Whitchurch, often showing the same programme as one of these.

In the 1950s the Globe specialised in showing foreign language films, usually subtitled, the only cinema in Wales specialising in such films.  The cinema was even called La Continentale at one stage. The papers of the time throw up some interesting stories. In Feb 1953 there was a private showing of the film Les Jeux Interdits for the Lord Mayor and the French and Spanish consuls.  In 1955 there was another private showing to the Watch Committee, this time of the film ‘The Stain in the Snow’. Only two members of the Watch Committee turned up, the Lord Mayor being one of them, and awarded it an X Certificate.

The Globe. Note how it appears to have been re-branded as La Continental at this time

In the early 1960s the cinema became a bingo hall for a short while but when that didn’t succeed it reverted to being a cinema sowing more mainstream films, often as double bills at reasonable prices.  In its final decades, the time many of us remember going there, it was a well-managed cinema owned by Mr & Mrs Wardle. Too much noise or sniggering and a torch light would highlight the offenders and order soon restored.

The curtains closed for a final time and the last choc-ice sold in the Globe cinema in 1985.  Sometime after it closed Steve Allison gained permission to take photographs of the interior of the building which he published in a nicely presented book ‘The Globe Cinema, Cardiff’ (ISBN-13: 978-0992989804), (available in Cardiff Libraries).

The Globe in later years

The building was demolished in 1987 even though it had had Grade 2 listed building status at some stage, subsequently revoked.  It was replaced by the Globe Centre, a collection of shops, a pub on the corner, originally called 42nd Street, then the Billabong and now the Pear Tree. The complex also contained a cinema, called the Monroe, originally operated by local cinema enthusiast Brian Bull  and later by the Chapter Arts Centre before becoming a Bollywood cinema  venture for a while and eventually closing in 2001.  Today it is a successful music venue called, yes, The Globe, which was started by former Amen Corner member Alan Jones in 2008. 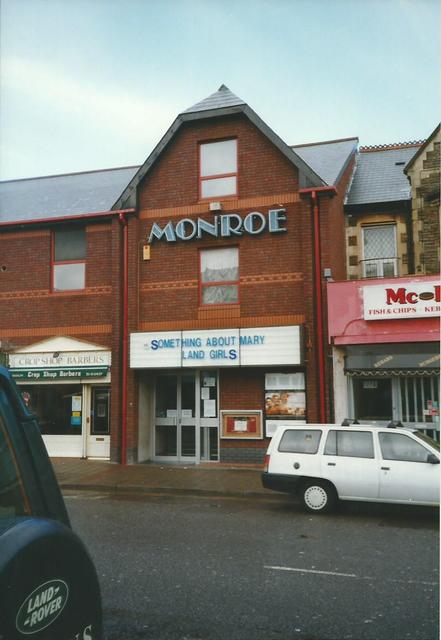 The Monroe – the last cinema on the site

A few extra pictures to bring back memories:

The couch in the waiting area where you would meet your fiends before the film began.

Splott Cinema in Agate Street opened in 1913 and had 750 seats.  It was extended and modified in the 1920’s with a planned balcony which does not appear to have been completed.  The building underwent a major re-build by local architect William S. Wortin 1930 when the ‘talkies’ came along and its capacity increased to 2000.  The Splott Cinema proudly boasted that it was the first cinema to be built for “talking picture” in Cardiff.  It was headquarters of the Splott (Cardiff) Cinema Co Ltd circuit who owned ten cinemas in Cardiff.

Splott Cinema, Agate Street, Cardiff in 1961 showing the film Elmer Gantry in which Burt Lancaster won an Oscar for his role as a fast-talking, hard-drinking travelling salesman.

The map of Splott in 1920 shows the cinema described as a picture house. To the east is Roath Station.

A presentation of an award to one of the staff at Splott Cinema (picture credit: Pauline Taylor)

It closed as a cinema in 1961 and then became a bingo hall.  It was very successful and continued in business, albeit under several owners/names, including a Top Rank Bingo Club, a Mecca Bingo Club.  It was closed in June 2009 as a Riva Bingo Club.  (See the Playing Bingo website for history and more photos of the hall). The building was then used briefly as the Shaddai Christian centre before becoming vacant. The empty building was destroyed by fire on 23rd February 2015.  The building was eventually demolished around 2016.

Splott Cinema building in later years. 2008 as a Bingo Hall (photo: David Lloyd). 2012 as the Shaddai Christian Centre. 2015 as an empty building and 2018 demolished (pictures: Google) 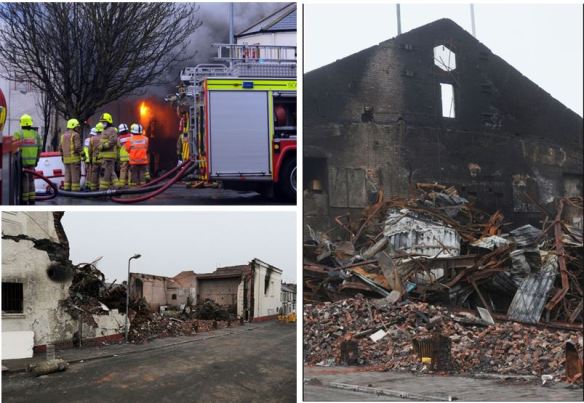 Splott cinema fire and aftermath in March 2015.  More than 60 properties had to be evacuated after the fire broke out with homes in Pearl St, Agate St and Diamond St affected.  (Picture Credits: Wales Online)

The Gaiety Grand in 1913 not long after it had been opened.