The bulk of the war memorials for the Roath parish are housed in neighboring St Edwards church on Blenheim Road.   The tower in St Margaret’s Church is however a dedicated war memorial in itself.  The roll of honour has been carved into a pillar of the tower that was completed after the Great War.  It dates from 1926.

The inscription on the pillar reads:

This tower was completed in Proud Memory

of the Men from St Margarets Church

who fell in the Great War

Frederick George Billot was born on 3 Jun 1860 in St. Martin, Jersey to George BIllot, a farmer and Ann Elizabeth Billot nee Renouf. He served in the merchant navy from 1884 and passed his master mariner qualifications in 1891 in London.  He married Emily Jane le Gresley on 12 Oct 1896 in Jersey and they moved to Cardiff shortly afterwards.  In 1901 they lived at 86 Mackintosh Place, Roath but by 1911 they had moved to 184 Albany Road, Roath. He was listed in the 1911 Census as being aboard the S.S. Crimdon as Master of the vessel in Roath Dock. In 1914 he had been a joint owner of a small shipping company known as The Channel Shipping Company (Cardiff) Limited. The existence of the company was however short-lived and was taken over by one of the bigger concerns, later known as the Emlyn Line. Frederick Billot was Master of the  S.S. “Euterpe”, a  1,522 tons vessel which was en route from Spain to Middlesbrough with a cargo of pyrities.  He died on 7 January 1916 aged 56 when the S.S. “Euterpe”, with a crew on board, 20 sunk after hitting a mine or being torpedoed in the North Sea off Hull.  He is remembered on the Tower Hill Memorial, London.  He is also remembered on the War Memorial tower at St Margaret’s church, Roath, the WWI war memorial plaque at St Edward’s church, Penylan and the Jersey Mercantile Marine Memorial at Jersey Maritime Museum. His son Edward Billot was killed in WWII whilst also serving in the Merchant Navy.  Commonwealth War Graves Commission record.

Harold Jackson Brown was born on 17 Feb 1899 in Leicester, the only child of Jonathon Stirtevant Brown, a commercial traveller in the hosiery trade, originally from Leicester and Alice Brown nee Emerson, originally from Belton, Leicestershire. In 1901 his father joined the Imperial Yeomanry and served in South Africa. His father was also later to serve in WWI in the Dorset Regiment. By 1911 they had moved to 1 Deri Road, Pen-y-lan.  He attended Marlborough Road Council School and then Cardiff High School from Jan 1911 until Jul 1914. After school, Harold was employed as a motor fitter and driver. He attested in Cardiff on 12 Mar 1917 and was posted two days later to the Army Service Corps Mechanical Transport Reserve Depot, Grove Park, London, as a fitter. He served on the Western Front from 27 Apr 1918 and afterward in the Army of Occupation in Germany until 19 Nov 1919. He then remained in the Army in Britain but suffered from a disability caused by illness or injury and was discharged on 8 Feb 1920. He died on 19 Feb 1921 aged 22 and his death registered in Marylebone, London. His mother applied for his medals in April 1921.  Harold Jackson Brown is one of the names recorded on the memorial tower at St. Margaret’s Church, Roath,  He is also He is commemorated on the war memorial in St. Edward’s Church, Pen-y-lan and the Cardiff High School war memorial plaque. He is not commemorated by the Commonwealth War Graves Commission and his place of burial is currently unknown. His father died in Leicestershire in 1938 but his mother was still living in Deri Road in 1941. 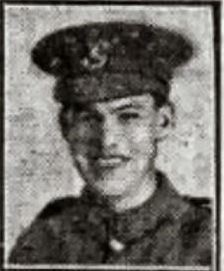 Albert Edward Percy Bruce was born on 20 Apr 1896 in Liverpool to Thomas Bruce, a victualler and later a Sea Captain, originally from Hawarden, Flintshire, and Margarite Jane Bruce nee Partridge, originally from Liverpool.  In 1901 the Bruce family were living in Seaforth, Liverpool, but shortly after move to Cardiff.  In 1902 Edward started to attend Marlborough Road School and the Bruce family are living at 90 Claude Road before later moving to 86 Marlborough Road.  At the age of 14 he served a short apprenticeship in the merchant navy including on board S.S.Escrick where he was at the time of the 1911 census.   He enlisted in the army in Nov 1914 and served with the Expeditionary Force in France and Flanders. He was wounded in May 1915 and invalided home but recovered  and rejoined his regiment in Aug 1915.  He was killed in action on 1 Sep 1916, aged 20, at Delville Wood in part of the Battle of the Somme.  At the time he had been a machine gunner with the 5th Battalion King’s Shropshire Light Infantry.  His Sergeant wrote: ‘“He was a Machine Gunner belonging to the section of my platoon, and I can assure you I have lost one of my best men.  His section received the thanks of the Brigadier-General for the splendid work they did in breaking up the German attack. He has left a good name behind him, and he will never be forgotten by his pals. He would have had promotion a long time ago, but he preferred to stop as he was.” His grave has not been identified.  He is remembered on the Thiepval Memorial in France.  He is also remembered on the St Margaret’s war memorial tower and the St Edward’s WWI memorial plaque. Commonwealth War Graves Commission record.  The CWGC record shows his mother Margarite living as ‘Escrick’, 25 Axminster Road (S.S.Escrick was the name of the vessel he served an apprentice on).  His older brother William Peter Bruce is recorded as being a civilian war casualty in WWII in Shanghai, China.

Richard ‘Dick’ Jellard Ford was born on 25 Jul 1876 in Swansea to Thomas Ford, a merchant,  originally from Dartmouth, Devon and Matilda Ford née Jellard,  originally from Blackawton, Devon.  It appears he had a tragic childhood.   His mother died whilst giving birth to him or shortly afterwards and was buried on 5 Aug 1876. His father remarried the following Spring to Matilda’s sister, Elizabeth Dimond Jellard, who raised him and his five siblings.  Thomas Ford, his father, was originally a mariner, captaining copper ore vessels to Cuba and alike. He then became a merchant and prominent businessman and Mayor of Swansea.  He died in 1883 when Richard Ford was only seven.  Richard attended Wycliffe school in Gloucestershire before leaving for Texas to work as a rancher.  He returned to home at the outbreak of the Boer War and went out to South Africa with the Imperial Yeomanry division, Kitchener’s Horse. He was involved in a number of engagements including the Relief of Kimberley. He received a commission during the war and transferred to the Worcestershire Regiment becoming a 2nd Lieutenant in Sep 1901. He was promoted to Lieutenant in Feb 1904 and served in West Africa from Dec 1904 to July 1909. On 30 Oct 1912 he married Eleanor Elizabeth Coward at St Margaret’s parish church Roath. Eleanor was daughter of  Phillip Coward, a coal exporter and church warden at Roath. Richard continued his military career with the 1st Battalion, Worcestershire Regiment. His regiment was one of the first at the front on the outbreak at the WWI. For six months he was almost ceaselessly in action, taking part in the retreat from Mons and all the chief engagements which followed. In his despatch of Nov. 20th, 1914, Sir John French greatly praised the Worcester’s for their part in the recapture of Gheluvelt. Captain Ford was mentioned in despatches and received the Military Cross for gallantry in leading his company during this action, and by a happy coincidence his decoration was gazetted while he was in England on six days’ leave in the following December. He was killed in action on 9 May 1915 at the Battle of Aubers aged 38. He is buried at Le Trou Aid Post Cemetery, Fleurbaix, France (grave A.6). A Memorial Service was held at St Margaret’s on 18 May and he is remembered on a stained glass window at the church depicting St Michael and funded by his father-in-law Phillip Coward which was dedicated in Oct 1916. He is also remembered on the war memorial plaque at Wycliffe College Chapel, Stonehouse, Gloucestershire.  Commonwealth War Graves Commission record.  His address at his time of death was given as 1, East Grove, Tredegarville which was the Coward household. His elder brother William Arthur Ford was a Major with the 3rd Welsh Howitzer Brigade, R.F.A.