Born in 1898 Vivian was the 2nd of 10 children for Lemuel & Isabella of Cathays Terrace, Cardiff. He went to Gladstone Primary, won a scholarship to Cardiff Municipal Secondary School at Howard Gardens, and then went on to gain certificates in French and Spanish at Cardiff Technical College. Vivian joined his father at Messrs John Cory & Sons on Cardiff docks as a coal trimmer.

In 1916 he enlisted with the Artists’ Rifles Officer Training Corps in Cardiff, gaining his commission in 1917. Probably because of his language skills, Vivian was assigned to the 14th Service Battalion of the Royal Welsh Fusiliers (RWF) as an Intelligence Officer responsible for initial translation of enemy documents and interrogations of prisoners at the front line in case there was immediate information that the officers needed.

Vivian and father, Lemuel, and sisters Isabell and Patty after he had enlisted, c. 1916

RWF’s campaign diary says: “Nov 4 At Poix du Nord, at 5a.m., two Headquarters Officers were killed and the Commanding Officer was wounded” and the official RWF Record (pg 492) describes the attack to clear a forest going into action at 5.30am and, although, assisted by a mist, there were many casualties noting that “the 14th, Lieutenant WBC Hunkin and Lieutenant V Llewellyn killed”. 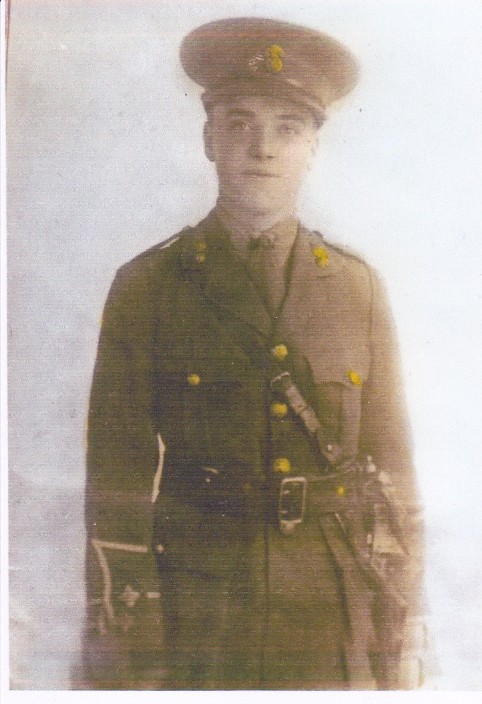 2nd Lt Vivian Llewellyn in uniform after his commission c. 1917

Vivian was buried in Forest Communal Cemetery, France and a memorial tablet funded by the Cory shipping company was dedicated on 4th May 1919 at Crwys Hall Presbyterian Church, on Monthermer Road (in what was believed to have been in those days in the old parish boundary of Roath).

The RWF Regimental Band played and tributes were given by his Commanding Officer, Major WP Wheldon DSO, and John Cory who said that had Vivian “been spared he would … have attained a very high position in the business world at Cardiff Docks” and was “a son worthy of his father”.

This memorial tablet was lost in the mid-1980s but was rediscovered and restored by the Llewellyn family descendants. It was rededicated on 5th May 2018 at Highfields Church, Monthermer Road, Cathays, not far from its original position in Crwys Hall. 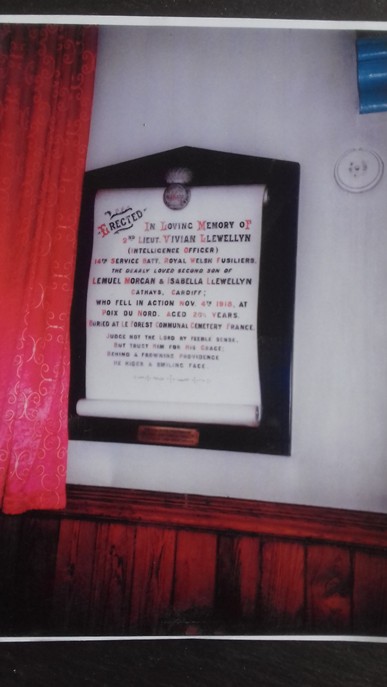 The above article was kindly provided by Jeremy Sparkes, a great-nephew of 2nd Lt Vivian Llewellyn.

The following information regarding other memorials at this church is taken from “War memorials in the city of Cardiff” compiled by David V Hughes (1995):-

In affectionate and ever grateful memory of the following members and adherents of this Church who made the supreme sacrifice in the Great War.

Being Dead they yet speak.

Their name shall live for ever and ever.

(Note: Whether the above memorial still exists is not known.  I made an enquiry at Highfields chuch and they were not aware of the memorial.  Ted Richards.  Jan 2019)

The following memorial is also listed at being at Crwys Hall, now Highfields church Monthermer Road, Cathays Cardiff, in “War memorials in the city of Cardiff” compiled by David V Hughes (1995):-

In the memory of the men of this church who gave

their lives in the Great War

Research notes on the people named on this memorial (Ted Richards):-

Ivor Hathaway was baptised at St John’s church Cardiff on 22nd Aug 1895.  He was son of Albert Amos Hathaway, a dock laborer,  and Emily Hathway née Billingham, both originally from Westbury, Gloucestershire.  In 1901 the family were living in 89 Sanquhar Street, Splott.   In the 1911 census the family had moved to 20 Diamond Street, Adamsdown, Cardiff.  Before the war Ivor was a porter at Peacock & Sons in Clifton Street.  In WWI he was a Gunner in Royal Field Artillery and died aged 19.  He died in the 1st Eastern General Hospital, Cambridge of appendicitis  on 2nd Feb 1915.  He is buried in Cathays cemetery, Cardiff (plot EF. NC. 9332.).  He was remembered on a memorial in Cardiff (location currently unknown).

Grave of I V E Hathaway in Cathays cemetery