Albany Road used to be called Merthyr Road but was renamed Albany Road in 1884 to commemorate the death of the Prince Leopold, Duke of Albany, son of Queen Victoria.

1880 and Merthyr Road, about to be renamed Albany Road looks pretty empty. Cross Cottage is at the corner of Penylan Road and a bit further East is Spring Cottage and Roath School. At the eastern end is Roath Court, the manor house of Roath. Note towards the bottom left is Plasnewydd, now the Mackintosh Sports Club.

Take a trip with us along Albany Road from west to east.  Click on the links to take you to articles with more information:-

The start of Albany Road taken from Richmond Road in ~1910. Note the policeman on point duty on the junction before traffic lights were installed.

Corner of Albany Road and City Road in 1960s with what would have been Argyll Stores on the right hand corner. and the police box on the left.

St Martin’s church is at the western end of Albany Road (CF24 3RP).  The church was built in 1899 on land donated by the Mackintosh estate, to a design by Frederick R Kempson.  The population of Roath was expanding fast at the time and a larger building was needed to replace the iron church on the site that had been built in 1886.  The foundation stone of the new church was laid by the mayoress Mrs S A Brain, wife of the brewer.  The brick built church in late Decorated Gothic style was opened in 1901 and St Martin’s became a parish in itself in 1903.  Its original lady chapel was decorated by a Belgian refugee artist in gratitude for the kindness shown by the parishioners during the First World War.  The interior of the church,  described as one of the most elaborate church interiors in South Wales, was largely destroyed in February 1941 when it was it by an incendiary bomb. The church was restored and reopened in 1955.  More of St Martin’s history is on their website.

Corner of Inverness Place and Albany Road. Food rationing queues outside Home and Colonial Stores No13 Albany Road in 1914. No13 currently occupied by Tesco. 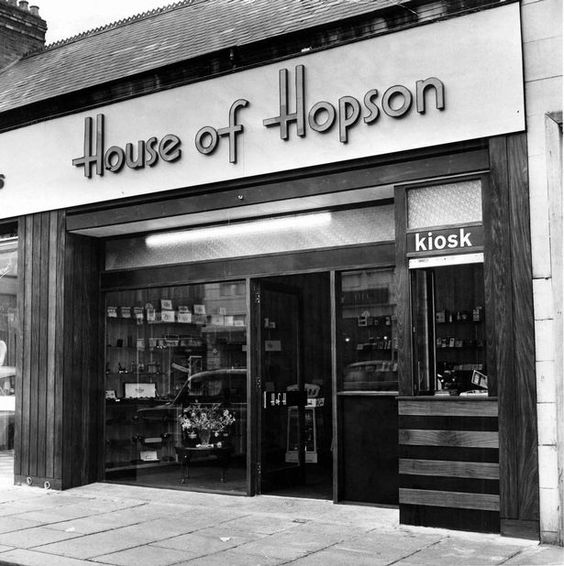 House of Hopson was the retail arm of Hopson & Son the operated from 27 Albany Road. The company started in 1899 and closed in the early 1980s.  More pictures and history of Hopson & Son can be found by clicking here.

One of Roath’s newest pubs, The Andrew Buchan, opened in 2012 at 29 Albany Road on the corner of Arabella Street (CF24 3LH). The pub is named after the founder of the original Rhymney Brewery in 1839.  The premises at 29 Albany Road has had an interesting history. In 1888 it was home of Issac Clarke, an egg merchant. In 1897 it was a grocery shop.  By 1937 it was a hat shop.  It then became part of the large Collins the Drapers business which owned not only 29 but also 11-25 Albany Road with Hopsons the tobacconists next door at No 27.   In 1984 it was a Halfords shop. The last shop to occupy the site was a video rental shop.  It then lay empty for a number of years before being converted to the Andrew Buchan in 2012.  The pub hosts music and art displays, often by local artists.  Andrew Buchan facebook page. 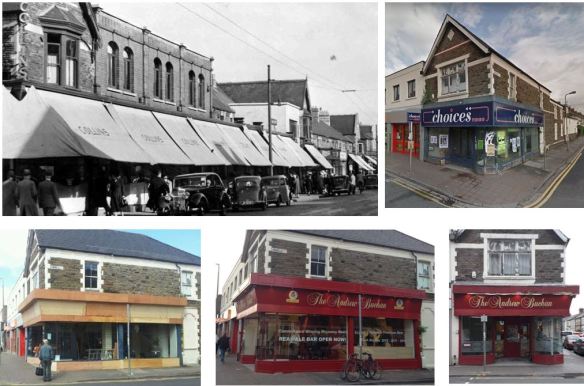 In 1911 a group of Suffragettes protested by barricading themselves in 34 Albany Road and avoiding the census.  Edwards & Co Drapers had closed prior to 1911 and at the time of the census was lying vacant,  but the picture probably still gives a good impression of what the premises looked like at the time. Today it is the Flavour Vapour e-cigarette shop. The story of their protest is told in a blog post here. 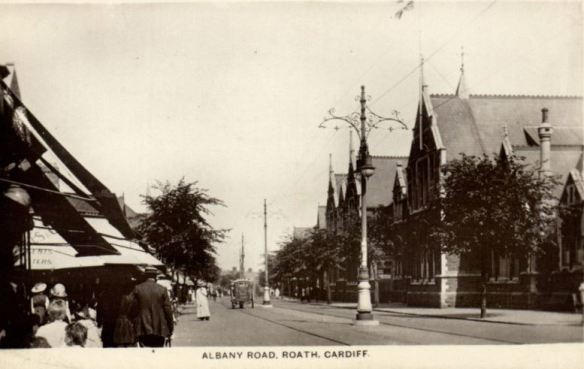 Albany Road Board School, now known as Albany Road Primary School (CF24 3RQ) was opened in November 1887.  It was constructed on land owned by the Mackintosh Estate and cost £9,579 to build. Almost 300 pupils attended the school when it was first opened but by 1898 the school had been expanded and could accommodate 1643 pupils.  When the school first opened it was noted that that the number of pupils not knowing their letters was high but by the end of the first year the school was being congratulated on its work and discipline which were described as excellent. The school was commandeered for use as a military hospital during WWI.  The school is still very much open and now called Albany Primary

1964 Albany Road. Chain Library was at No.84, corner of Alfred Street.

The church was on the corner of Albany and Wellfield Road.  The building survives but the congregation left in 1990 and were for a time holding their services in the Mackintosh sports and Social Club.  The church was built in 1898 to the design of architects Jones, Richards and Budgen of Cardiff.  The chapel is

described as stone built in the Gothic style with a long-wall entry plan, an integral tower and perpendicular leaded windows.  It was extended and altered in 1911.  Part of the ground floor of the original church building is today used by retailer Rainbow Bargain.  Much of the interior survives including the stone pulpit now surrounded by bargains.  The church had a roll of honour of all the 109 men who served in the armed forces in WWI which was thought lost but then found for sale and is now mounted in Roath Park Primary school.  The war memorial tablet has also recently been found to be in safe storage at Thornhill Crematorium.  The press reported in 2017 that the church building had been sold to a private buyer for £410,000. 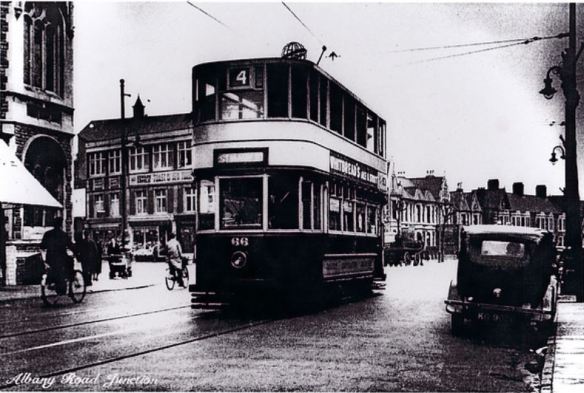 A tram on Albany Road, near the junction with Wellfield Road.

On the corner of Albany Road and Wellfield used to be the Globe Cinema. When it opened in 1913 it was called the Penylan Cinema. It closed in 1985. Now occupying the site is the Pear Tree pub.  The is more about the history of the Globe cinema here.

Albany Road at its junction with Wellfield road early 1900’s . The corner properties were demolished 1914 for construction of Penylan Cinema. Today only the three houses on the right of the picture remain, the one with the windows on the third level is Pizza GoGO. 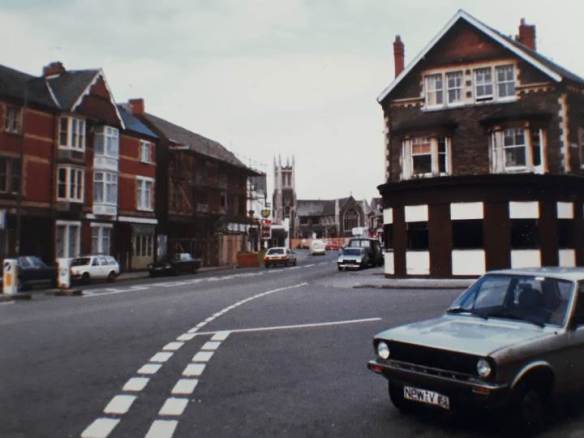 Albany Road at junction with Penylan Road, probably 1980s. The church in the distance is visible following the demolition of the Globe Cinema and prior to the construction of the Globe centre / Pear Tree. Note the BP petrol station, Bill Thomas Motors,  on the left was still operating.

Cross Cottage, 1883, which used to be on the corner of Albany Road (Merthyr Road) and Penylan Road. It was demolished in 1899.  Now occupying the space is De Mara restaurant and the Bottle Shop.

The Claude Hotel at 140 Albany Road in Roath (CF24 3RW) is a fine Victorian building, the exterior of which has changed little since it was constructed in 1890. The large bar area was the result of  a refurbishment in 1994 and the amalgamation of the public bar, a ladies snug, the off licence and skittle alley at the rear.  Regulars however have always insisted that the Oak Room, which was  a men-only lounge up to the early 1970s, remain untouched.  The name originates from Claude Williams of the Williams family who lived in Roath Court (now James Summers funeral home) and owned the Roath Court estate.   When Charles Henry Williams was selling off bits of the estate for housing, various streets and pubs were named after family members e.g. Crofts, Rose, Claude. 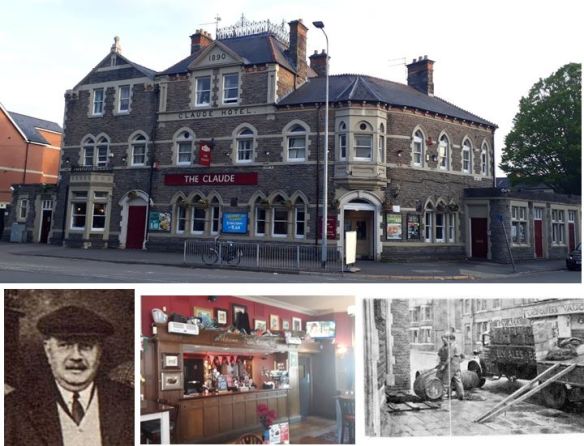 Photos: Claude Hotel (2019), Claude Williams of Roath Court in 1937, the Oak Room, fresh supplied being delivered to the Claude.

These cottages stood just east of the Claude Hotel. They were demolished in 1959. In 1958 they were collectively known as Roath Court Cottages. Previously they were known as, from left to right, Jessamine Cottage 1, Jessamine Cottage 2 and White Rose Cottage. The later was occupied in 1893-4 by James Raynor, coachman to the Roath Court Estate. After demolition the cottages were replaced by a petrol filling station which itself has now been demolished and replaced by flats called Pritchard Court.

Albany Road Marlbourough Road junction, where the roundabout now is.

Some of the history of Albany Road was covered in our  Project Newsletter Vol 1 No.4.