William Alford was born on  15th Oct 1898 in Barnstable Devon.  His father William Henry Alford was a carpenter by trade. In 1901 the family are living at 23 Forrest Road, Canton, Cardiff.  In 1904 the family have moved 5 Grouse Street in Roath and William is enrolled in Stacey Road Infants School, Cardiff having previously attended Grange School.  In 1910 he is enrolled at Howard Gardens. In the 1911 census the family consisting of his father William Henry (42), Eliza (44) his mother, his sister Edith (3) and widowed grandmother  Jane (75) and William (12) are still living in Grouse Street.  He serves in the army and was awarded  the following medals: Britain, Campaign, Gallantry & Long Service Medals & Awards. He died on 22nd Sep 1918  aged 20 in northern France.  He is buried at Ronssoy Communal Cemetery (Section B, Grave 8) in the Somme region of France.  He is remembered on the memorials at St Edward’s church and Howardian school.      Commonwealth War Graves Commission record

John William ‘Willie’ Beer was born on 14 May 1898 in Cardiff to John Wesley Beer, a fruit merchant, originally from Appledore, Devon, and Elizabeth Beer née Taylor, originally from Cardiff.  In 1901 the Beer family were living in Railway Street, Splott and in 1911 in Somerset Street, Grangetown before they moved to 97 Cyfarthfa Street, Roath.  The 1911 census sadly records how Elizabeth had lost five of her seven children and only two survived, Willie and his sister Winnie.  Before joining the army Willie had worked briefly for Great Western at Cardiff station and later at Spillers and Bakers.  He enlisted in Cardiff Dec 1915 when only 17, originally joining the Monmouthshire Regiment (service number 4646) before transferring to the South Wales Borderers.  He was on active service for twelve months, serving in a Lewis gun section before he was reported missing, presumed killed in action on 21 Nov 1917 aged 19.  John William Beer is remembered at the Marcoing British Cemetery, France.  He is also remembered on the WWI Memorial plaque at St Edward’s church.  Commonwealth War Graves Commission record.

Frederick George Billot was born on 3 Jun 1860 in St. Martin, Jersey to George BIllot, a farmer and Ann Elizabeth Billot nee Renouf. He served in the merchant navy from 1884 and passed his master mariner qualifications in 1891 in London.  He married Emily Jane le Gresley on 12 Oct 1896 in Jersey and they moved to Cardiff shortly afterwards.  In 1901 they lived at 86 Mackintosh Place, Roath but by 1911 they had moved to 184 Albany Road, Roath. He was listed in the 1911 Census as being aboard the S.S. Crimdon as Master of the vessel in Roath Dock. In 1914 he had been a joint owner of a small shipping company known as The Channel Shipping Company (Cardiff) Limited. The existence of the company was however short-lived and was taken over by one of the bigger concerns, later known as the Emlyn Line. Frederick Billot was Master of the  S.S. “Euterpe”, a  1,522 tons vessel which was en route from Spain to Middlesbrough with a cargo of pyrities.  He died on 7 January 1916 aged 56 when the S.S. “Euterpe”, with a crew on board, 20 sunk after hitting a mine or being torpedoed in the North Sea off Hull.  He is remembered on the Tower Hill Memorial, London.  He is also remembered on the War Memorial tower at St Margaret’s church, Roath, the WWI war memorial plaque at St Edward’s church, Penylan and the Jersey Mercantile Marine Memorial at Jersey Maritime Museum. His son Edward Billot was killed in WWII whilst also serving in the Merchant Navy.  Commonwealth War Graves Commission record.

Harold Jackson Brown was born on 17 Feb 1899 in Leicester, the only child of Jonathon Stirtevant Brown, a commercial traveller in the hosiery trade, originally from Leicester and Alice Brown nee Emerson, originally from Belton, Leicestershire. In 1901 his father joined the Imperial Yeomanry and served in South Africa. His father was also later to serve in WWI in the Dorset Regiment. By 1911 they had moved to 1 Deri Road, Pen-y-lan.  He attended Marlborough Road Council School and then Cardiff High School from Jan 1911 until Jul 1914. After school, Harold was employed as a motor fitter and driver. He attested in Cardiff on 12 Mar 1917 and was posted two days later to the Army Service Corps Mechanical Transport Reserve Depot, Grove Park, London, as a fitter. He served on the Western Front from 27 Apr 1918 and afterward in the Army of Occupation in Germany until 19 Nov 1919. He then remained in the Army in Britain but suffered from a disability caused by illness or injury and was discharged on 8 Feb 1920. He died on 19 Feb 1921 aged 22 and his death registered in Marylebone, London. His mother applied for his medals in April 1921.  Harold Jackson Brown is one of the names recorded on the memorial tower at St. Margaret’s Church, Roath,  He is also He is commemorated on the war memorial in St. Edward’s Church, Pen-y-lan and the Cardiff High School war memorial plaque. He is not commemorated by the Commonwealth War Graves Commission and his place of burial is currently unknown. His father died in Leicestershire in 1938 but his mother was still living in Deri Road in 1941.

William Alfred Ellement was born on 14 Dec 1885 in Rickmansworth, Hertfordshire, to George Henry Ellement, a labourer originally from Mill End, Herts and Lucy Ellement nee Reed, originally from Chalfont St Giles, Bucks. After working on a farm when he was young he then became a prison warder. In the 1911 census he was working and living at Chelmsford Prison in Essex. In 1912 he marries Susan Alice Cornish in Kensington, London.  The following year they appear to have moved to Cardiff for there is a newspaper report from Aug 1913 describing how Warder Ellement discovers a suicide victim one morning at Cardiff Gaol. He joins the 1st Battalion, Bedfordshire Regiment and becomes a Sergeant but is killed in action on 8 Jan 1915 aged 29 on the Western Front.  His body was not recovered and he is remembered on the Menin Gate memorial at Ypres (panel 31-33). He is remembered on the WWI memorial at St Edward’s the Confessor church, Pen-y-lan, Cardiff.  It is not currently known where he and his wife Susan lived in Cardiff.  In the 1939 register Susan A Ellement is living in Taffs Well. She died in 1955 aged 74. Commonwealth War Graves Commission record.

William Alfred Ellement remembered on the Menin Gate Memorial, Ypres – not the variation in spelling of his surname.

George Henry Griffin was born in Cardiff in 1891 to Samuel Griffin, a builder’s haulier, originally from Llanedarn and Sarah Jane Griffin nee Spencer from Cardiff.  He was christened at St Margaret’s church, Roath on 7 Aug 1891.  The Griffin family lived at 33 Elm Street, Roath. He joined the Devonshire regiment early in the war, went to France in Feb 1915 and was killed in action on 22 April  1915 at Zillebeke, Belgium, aged 24. He has no known grave.  He is remembered on the Ypres (Menin Gate) Memorial in Beligium.  He is also remembered on the WWI memorial plaque in St Edward’s church.  Commonwealth War Graves Commission record.

Thomas Henry Cuthbert Stephens was born on 6 May 1895 in Cardiff to Henry Stephens, a hydraulic crane operator and coal trimmer,  and Hannah Maud Stephens nee Cooper both originally from Cardiff.  He was baptised on 2 Aug 1895 that year at St Margaret’s church, Roath.  In 1901 the family lived  Talworth Street. He attended Marlborough Road School and later Albany Road School where he won the 100yds hurdle at the Cardiff Schools Sports Day in 1908 before moving on to Howard Gardens school later that year. In 1911 the Stephens family lived in 83 Keppoch Street and Cuthbert was working as a junior clerk. The Stephens family then moved again to lived at 26 Roath Court Road.  He enlisted 3 September 1914.  He survived the war and was discharged 8 Mar 1919 having been previously injured or due to illness but died on 18 Mar 1920 in Cardiff aged 24.  He is buried at Cathays Cemetery, Cardiff (grave  VL. CE. 32.).  He is included on the memorial at St Edward’s Church, Roath.  The Processional Cross at At Edward’s was dedicated to the church in memory of his name. Commonwealth War Graves Commission record. 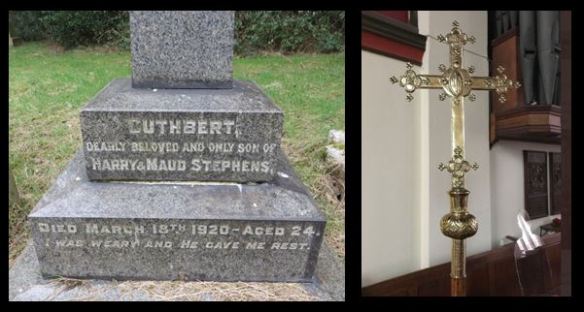 Thomas Howells was born in Merthyr around October 1880.   Before joining up he had already served six years in the Carmarthen Militia. At the time he joined up he was working as a collier.  He joined up on 9 Oct 1914 in Cardiff and served in Egypt until 9 Aug 1917 when he was discharged with ill health (enteritis).  Thomas Howells passed away on 6 Feb 1920 aged 39. He died at 132 Newport Road, Cardiff which is probably one of the houses that was being used as a military hospital.  He is buried at Cathays Cemetery, plot EB.81. The above information is taken from his military records which also records that his next of kin was his brother, John Howells, who was lodging in Treharris at the time.  He is remembered on the Red Cross memorial plaque at St Edward’s church, Pen-y-lan.  Commonwealth War Graves Commission record. (Possible: We know when he was discharged Thomas was 36 yrs 10 months so can pinpoint his birth to ~Oct 1880. There is not a Thomas Howells birth registered in Merthyr in Q4 1880 but there was one in Q1 1881, mother’s maiden name Davies. This ties in with an 1881 census of David Howells, an iron puddler at Cefn Coed, Merthyr and his wife Mary with Thomas 4mths. In 1901 Thomas is a ‘Private soldier in Reg’, and there is a brother John, coal hewer)

Cyril Cadle Tayler was born on 27 May 1920 in Cardiff to Herbert William Tayler, a managing director of a tobacconist, originally from Aldsworth, Gloucestershire, and Jessie Tayler from Lancashire. Cyril attended Cardiff High School for Boys on Newport Road, Cardiff and lived at 94 Colchester Avenue, Panylan, Cardiff. He was commissioned in the Royal Welch Fusiliers on 18 September 1942, and volunteered for airborne forces.  He married Beryl Ward from Northleach, Gloucestershire in early 1944.  Lieutenant Tayler successfully completed his glider pilot training and was posted to A Squadron, 1 Flight, 1st Wing, The Glider Pilot Regiment, and took part in Operation Market Garden (Arnhem).  He was the pilot of Horsa glider CN140, which landed on the Johannahoeve on 19 September 1944.  He was possibly wounded and taken POW.  He died of his wounds on 20 September, aged 24, and was given a field burial in the German Military Cemetery at Grebbeberg, east of Rhenen and was re-interred to Arnhem Oosterbeek War Cemetery on 10 November 1945 (Ref: Para Data). He is remembered on the memorial plaques at St Edward’s church, Penylan,  at St Peter & St Paul church, in Northleach, on Northleach village war memorial and a memorial stone on the family grave in Northleach cemetery. Commonwealth War Graves Commission record.

The fourth memorial is a set of four wooden tablets from nearby St Anne’e church.  These originally formed part of the pulpit at St Anne’s Church, Cottrell Road, which was closed in 2015. They were restored by Mr Robert Stogdon and relocated to the South Wall of St Edward’s Chancel. They were rededicated on Sunday 5th November 2017 by Revd Canon Stewart Lisk, Vicar of Roath.

The names on the memorials have been researched by members of St Edward’s church and published in a book: St Edwards Church by Amy Stinson, published 2018,  ISBN: 978-1979341523.

The information on the people on the memorials is also available on the church website  as well as the Roll of Honour website.