There are two brass memorials and a roll of honour housed in the main church building on the East wall. 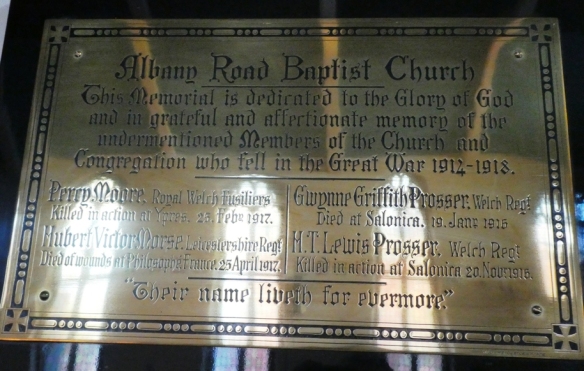 Transcript of the WWI memorial:

This memorial is dedicated to the Glory of God

and in grateful and affectionate memory of the

undementioned Members of the Church and

“Their Name liveth for evermore”

Research into the names on the WWI memorial:

Percy Moore was born in 1893 in Cardiff to Edwin Moore, a railway inspector, from Arlingham, Gloucestershire and Annie Moore (nee Pritchard) from Croesyceliog.  The family lived in various locations in Roath including Inverness Place, Montgomery Street and Arran Street.  Percy is recorded as working as a clerk in the 1911 census.  He joins the 14th Battalion of the Royal Welsh Fusiliers and is killed in action at Ypres, Belgium on 25th Feb 1917 aged 23. He is buried at Medinghem Military Cemetery in Belgium near the French border. 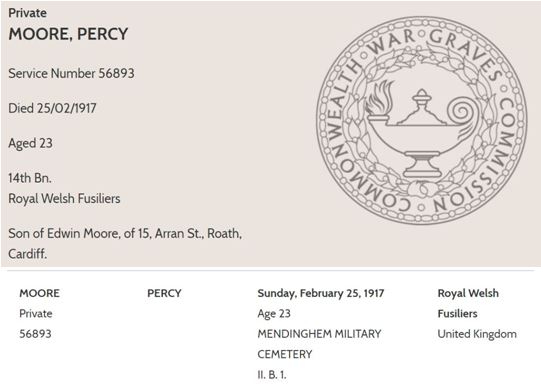 Hubert Victor Morse was born in 1891 in Penarth to Edwin Morse, a general haulier, originally from Gloucestershire and Ellen Morse, nee Ashelford, originally from Somerset. Hubert worked as a clerk in a rents and estates business before joining the Leicestershire Regiment as a Private.  The family had lived at 105 City Road in 1911 but Hubert’s war record show them then living at 40 Bedford Street.  The memorial states that he died of his wounds on 25th Apr 1917.  He is buried at the Philosophe British Cemetery in northern France.

The remaining two men on the memorial, Gwynne Griffiths Prosser and Herbert Thomas Lewis Prosser are bothers.  They were born to John Prosser, a docks labourer, and Hannah Prosser nee Angove.  In 1911 the family were living at 127 Donald Street and Gwynne working as a butcher’s assistant and Lewis a grocer’s assistant.  Both brothers married.  Gwynne married M.E.C.Chester-Woods from Sussex whilst Lewis Prosser married Mary Marie Booy from Cardiff in 1915 and had a son Edward Lewis Colston Prosser.  Private Gwynne Prosser of the 11th Battalion Welsh Regiment died on 19th January 1916  in Salonika aged 25. He is buried at Lambert Road cemetery just outside Thessaloniki city in Greece.  His brother, Lance Corporal H T Lewis Prosser (service number 15467), also of the 11th Battalion Welsh Regiment, died of his wounds on 20 Nov 1916 aged 22 in Salonika, Greece.  He is buried at Karasouli Military Cemetery in Greece.

Transcript of the WWII memorial:

This Memorial including a Film Projector is dedicated

to the Glory of God and in grateful and affectionate memory

of the undermentioned Members of the Church and Sunday School

“Their Name liveth for evermore”

Research into the names on the WWII memorial:

William Norman Geddie was born in May 1914 in Cardiff to William Geddie, a merchant seaman and Letitia Maud Geddie (nee Walrond).  The family lived at 146 Kimberley Road, Penylan, Cardiff.  William was a Flight Sergeant (Wireless Op./Air Gunner) 76th Squadron in the Royal Air Force Volunteer Reserve.  He died on 17th Sept 1942 aged 28.  The memorial states that he died at Essen.  He is buried at Longuenesse (St. Omer) Souvenir Cemetery south of Calais in France (Plot 8. Row A. Coll. grave 10-13).

Gwyn Towyn James was born in 5th May 1906 in Abertridwr to James Griffith James of Troedyrhiw  and Harriet James (nee Roberts) of Porth.  In 1911 the family lived at 129 Glenroy Street with the father, James, working as a grocer’s manager.  Gwyn married Mary Isobel McMaster, a cashier, in 1939 in Cardiff.  Gwyn’s father, James, died in 1941 when living at 70 Glenroy Street. Gwyn served in the Royal Artillery  (service number 1452857) and died as a prisoner of war in Thailand on 14th December 1943.  He is buried in Kanchanaburi War Cemetery in Thailand. 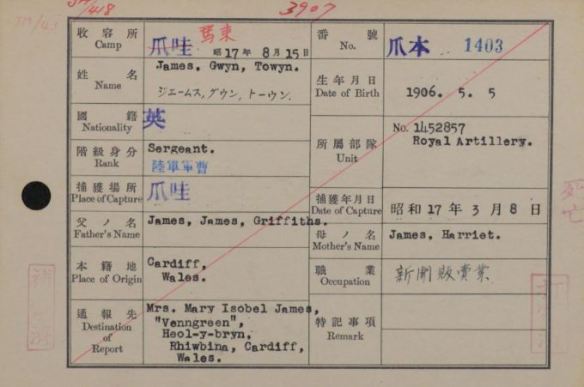 David Matthews was born on March 5th 1920 in Pontypridd to Cyril Thomas Matthews and Elizabeth Matthews.  In 1939 the family ran an ironmongers shop at 107 Albany Road and David was working an ironmonger’s assistant. During the war he was a 2nd Radio Officer on board the S.S.Victoria City which was lost at sea on 2nd Dec 1940.  At 21.42 hours on 3 December 1940 the unescorted Victoria City, travelling from New York USA and Halifax, Canada, to London and a straggler from convoy HX-90, was hit on port side underneath the bridge by one G7a torpedo from U-140 and sank by the bow within 15 seconds about 30 miles north-west of the Donegal coast in Ireland. The master and 42 crew members were lost.  The ship had been owned by Sir William Reardon Smith & Sons Ltd, Cardiff. 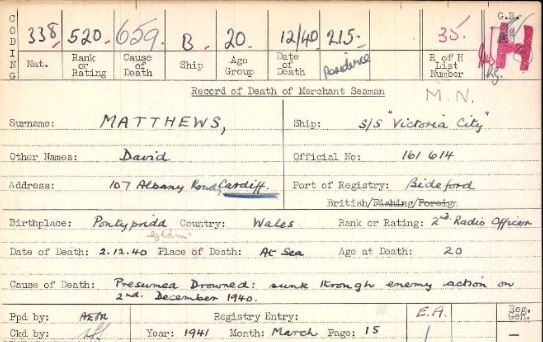 S S Victoria City on which David Matthews was serving when it was hit by a torpedo.

Mrs Elizabeth Ann Wing, aged 81 years, widow of John Wing, died on 18th May 1943 at 12 Penylan Road in the final bombing raid on Cardiff. She is buried at Cathays Cemetery.  Lilian Wing, aged 49, daughter of Elizabeth, also died in the same property but is not mentioned on the memorial.

Mavis Rees, aged 9, daughter of John and Dora Rees (confectioner and tobacconist), also lived in 12 Penylan Road and died in the bombing raid.

The bomb damage to the houses in Penylan Road