“Towns are the destructive whirlpool of the human race”- Rousseau.

It comes as quite a surprise to many Cardiffians that there was once a village of Roath. Oddly, although locals regularly talk these days of nearby Cyncoed as a ”village”, there never was such a village and even today the place hardly merits the description. Yet nobody, except a few well-informed local historians, talks about the village of Roath even in the past tense.

The census enumerator in 1851 starts his list in what was still described as “The Village”, and under this heading he proceeds to name the inhabitants of cottages on what became known as the Roath Court Estate: stretching westward along the Merthyr Road (Albany Road) from Roath Court toward the site of the present Claude Hotel, where the road took a turn northward up Pen-y-lan Hill. It is possible that other small cottages regarded as within the village lay in the portion of the Roath Court estate between the residential end of Albany Road and Newport Road in the present Elm Street locality. 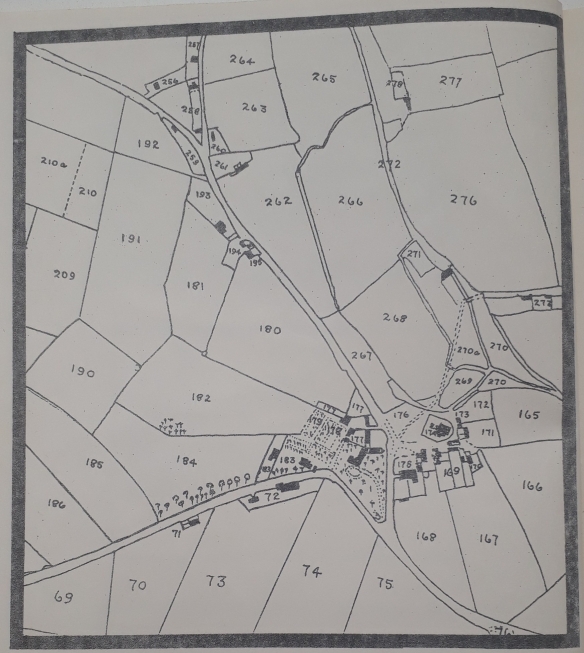 SECTION OF 1840 TITHE MAP OF THE PARISH OF ROATH SHOWING THE VILLAGE AND ENVIRONS. Bottom left to bottom right is the Turnpike Road from Cardiff (Newport Road). From its Junction with this road, the Merthyr Road (Albany Road) proceeds to the top left corner. At the fork the road to Cyncoed and Llanedeyrn (Pen-y-lan Road) sweeps northward.

The Tithe Plan and Census of 1841 reveals the existence of a village community of some 80 folk near the junction of the east-west highway (Roath Road, later called Newport Road) with the old Merthyr Road (Albany Road). The village was clustered loosely around the parish church of St.Margaret’s. The Roath Brook, on which stood the mill which survived until 1897, a descendant of the early medieval manorial mill, flowed close to the church on its way to the River Rhymney, following a course through an area now landscaped into Waterloo Gardens.

Within the acute angle of the junction of the two roads, on the site of the present funeral home, stood Roath Court, an eighteenth century mansion, the reputed ancient site of Roath Dogfield manor house. In 1841 its occupant was Charles Crofts Williams, known as the local ”squire”. 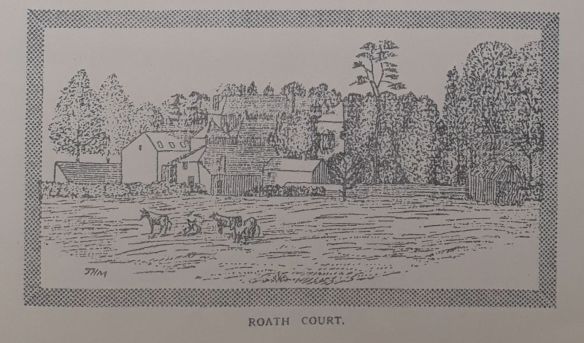 He had settled there in 1836,having married his cousin Blanche Williams. He lies buried with his wife and children in St.Margaret’s churchyard. Three tied cottages on a site now occupied by a petrol filling station near the present Claude Hotel provided accommodation for workers on the Roath Court estate, while a cottage close by was used as the village dame school. Some of the cottages survived in a modified form until the early 1950‘s.

Behind the church stood the Great House which was demolished in January 1967 and replaced by an old people’s home, retaining the name ‘Ty Mawr’. Here for several generations lived the Evans family. The Tithe map shows it to be the homestead of a farm of some 65 acres of land owned by Sir Charles Morgan (the Tredegar Estate). lt was occupied in 1841 together with the adjoining property of Ty Collyand its 32 acres by William Evans the younger. By 1851 William Evans was farming a total of 303 acres of arable and 129 acres of meadow, employing 14 men and 2 women. Living with him in the Great House were his wife, three young children, a nurse, a housemaid, a dairymaid and three male servants. Excluding Roath Court, Ty Mawr must have been the most substantial residence in the village as well as one of the oldest. Of the couple of old thatched houses at the back of Ty Mawr near the church, the smaller one was known as “the old Clerk‘s house“. 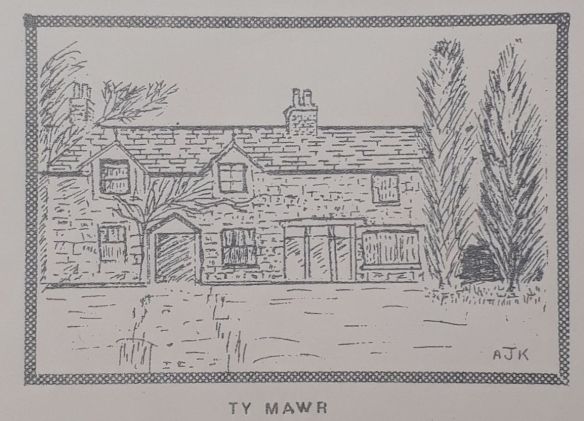 Close by, stood another farmstead known as the “Great Barn“ (sometimes referred to in corrupt Welsh as “Skibor Vawr”) occupied by William Evans’ father who gives his age at the time of the 1841 Census as 73. Seven other persons were living there, including a a male servant aged 21, a female servant aged 77 and an agricultural labourer aged 60. By 1851 the Great Barn was in the occupation of 24 year old Thomas Evans, his 19 year old wife Mary, and Barbara Davis – a 22 year old domestic servant.  Thomas was then farming 20 acres. The property seems to be in the same homestead as that shown on the Tithe Map as “Dean’s Farm”, consisting of some 117 acres of detached land of various plots south of them main road (Newport Road) made up of mixed arable, pasture and meadowland.

The property seems later to have also been known as “Roath Court Farm”. Today the site is occupied by a block of substantially built houses Nos. 281 to 315 Albany Road, between Church Terrace and Newport Road opposite the entrance to Summer’s Funeral Home. All the land of the farm belonged to the Marquis of Bute and it is interesting to find that the farmstead in the village was separated from its land holding and stands on a small isolated plot (¾ acre) of Bute land.

The only other farmstead that can be regarded as within the confines of the village was Deri Farm, which gives its name to the present Deri Road and was situated to the north-west of the church. Although according to J. Hobson Matthews the name had much to his regret been corrupted from the welsh Deri (Oak trees) to Dairy Farm, the Census enumerator in 1841 had good reason to call it “Dairy Farm“. lts two principal occupants were in fact dalry women – Elizabeth Morgan aged 80 and Ann Richards aged 45. Ten years later Ann Richards (widow) is shown as farming 40 acres and employing one man.  In 1861 she was farming only 20 acres.

The village green lay to the west and north-west of the churchyard and was originally an area of common pasture. About 1893 the portion nearest the churchyard was enclosed by the Cardiff Corporation and planted with trees. They had previously dumped rubbish there. Apart from the portion of Waterloo Gardens nearest the church, all that now remains is the traffic roundabout at the junction of Albany Road, Marlborough Road and Waterloo Road.

Roath, with its mill on the stream, its squat lime-washed parish church, its manor house, pinfold and village green possessed all the attributes of a typical village. The only thing lacking was a local hostelry.  Roath in Norman times as the dairy manor of Cardiff Castle and source of produce for Cardiff market was eventually to be destroyed and engulfed by Cardiff. By the 1850’s ribbon development of nouveau riche Regency villas was proceeding apace along the Newport Road. In 1870 the parish church was demolished and a new St.Margaret’s built on the‘ site by the Marquess of Bute. Land owners were busily urbanising their estates. Roath was finally absorbed into Cardiff in 1875, by which time it had lost its identity as a village and had become yet another suburb.