The whereabouts of this memorial has recently come to light.  It is in the safe keeping of Cardiff Bereavement Services having at one stage been stored on one of the chapels at Cathays Cemetery.

Fourteen men are listed on this memorial.

This is probably an error and should have been G W Abbott:-

George WIlfred Abbott was born in Abertillery, Monmouthshire in 1893 to Edwin Abbott and Emily Margaret Abbott née Collier.  By 1901 the family had moved to Roath and George’s father Edwin was working as a wood sawyer but he dies in 1903 leaving Emily to bring up the three sons.  In the 1911 census we find George working as a weights and measures assistant for the city council and the family living at 64 Cottrell Road, Roath.  George is killed in action on 25th September 1916 at the battle of the Somme.  He is remembered on the Thiepval Memorial in France.  He was also remembered on the Roath Road Weslyan Church memorial.  Commonwealth War Graves Commission record.

Henry Frank Baselow was born in 1897 in Harlesden, Middlesex to Henry David Frederick Baselow, a cigar manufacturer, originally from Rostock, Germany, and Alice Emma Bielski, originally from Cardiff. The family lived in both Middlesex and Mexico, where his father’s cigar factory was based. His father fought for Germany in the Franco-Prussian war but died in 1913 after which the family moved to Cardiff and lived at 55 Westville Road, Penylan.  Henry Frank Baselow was employed in the accounts department of Morgan Wakely and Co, coal exporters, Mount Stuart Square, Docks, Cardiff.  He joined a Public Schools Battalion, Royal Fusiliers in April 1915 and went to the Western Front the following November. He underwent Officer Cadet training at Oxford in May 1916 and was commissioned in the Hampshire Regiment in September 1916 and later transferred to Machine Gun Corps. He returned to France in February 1917 but was killed in action on 5 Oct 1917 aged 20.  He is buried at the Buttes New British Cemetery, Belgium (grave XII. AA. 14).  He was remembered on the Roath Park Wesleyan church memorial, currently in storage at Thornhill crematorium. Commonwealth War Graves Commission record.

This Roll of Honour is now on display at Roath Park Primary School . The story of how it was re-discovered is told below.

The story of the rediscovery of the Roll of Honour is told here:

A MEMORIAL roll of honour from a church commemorating the valour of 109 men killed in the Great War of 1914-18 has turned up in an antiques warehouse in Guildford, Surrey with an a price tag on it of £35.

The mahogany framed plaque with the names of the men inscribed by craftsmen on hardboard across four columns hung proudly in Roath Park Wesleyan Church, also known as the Roath Park Methodist Church,  until it closed seven years ago

It was discovered this week dusty and neglected in the back of the warehouse by a former Royal Marine who is fighting to save the nation’s memorials from vandals, thieves and neglect.

“With WAT I paid just £44.13 to retrieve the memories of 109 men who gave their lives fighting for their country and the freedom we now take for granted.  It’s pretty disgusting.” said lan Davidson. who two years ago founded the Friends of War Memorials to conserve memorials and preserve them for posterity.

He now wants 10 see the roll of honour which according to the date on it, was painstakingly completed on July 10. 1921, returned to Roath Park. and the community from where the 109 men came.

I will personally present it to Roath Park School for the benefit of children who may be related to the men whose names are on the roll of honour and would like the pupils to be present at a re-honouring service,” he said.

I want to see an amnesty declared on war memorials so they can be returned to the town or village where once they meant so much.

“They shouldn’t be sold but passed on to other churches in the area or placed in schools so children can become aware of a vital pan of our heritage.  We want to stamp out this negligent disposal of war memorials.”

The discovery of the memorial from the church in Roath is only the tip of the iceberg in a market where memorials to the war dead are sold off as curios.

War memorials are being discarded as a result of the closure of hundreds of churches.

While some are sold as curios, others finish up as fireplaces and even menu boards for fashionable restaurants.

In one case an antiques dealer attempting to sell a carved oak memorial covered in the names of a village’s war dead assured the potential purchaser that the lettering could be removed without too much difficulty.

The National Inventory of War Memorials set up in 1989 to record every war memorial in the British Isles believes that there are approximately 54.000 around the UK.

So far at has only recorded around 26,000 and fears that many of those outstanding are lost forever.

Churches and chapels across Britain are being closed at a rate of around one a week and in the process their memorial plaques are being removed.  Some are sold to antique dealers while others are exported to the US.  Others end up in scrap yards.

During World War I communities made fists of local men and women serving with the armed or auxiliary forces and as news reached home that those named on the lists had died they became revered objects.

After the war the lists were enshrined  in permanent memorials.

SINCE the imposing Grade II-listed Roath Park Wesleyan Church building on the corner of Albany Road and Wellfield Road was sold it has been used as an indour market selling cheap consumer durables.

Developers had much grander plans for the church.  They had wanted to turn it into an upmarket shopping complex and had won backing from the local council.

But the recession got in the way and the proposals never materialised.

Now the doors are closed and the interior fabric is said to be deteriorating.

Robin Pearce, a steward at the time the church was closed down said he had no idea how the memorial roll of honour could have found its was to Guildford.

“I haven’t got a clue. We had to sell it seven years age and I believe it’s up for sale again now.”

Whilst the Roll of Honour above lists of all those at the church who served in WWI it would also include those who lost their lives.  The following document names the men who lost their lives in WWI and are named on the memorial plaque (see top of page).  This plaque is in safe keeping at Cardiff Bereavement Services. 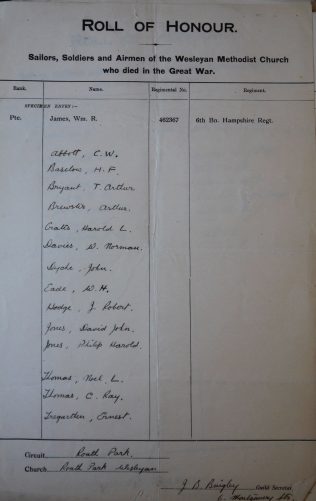