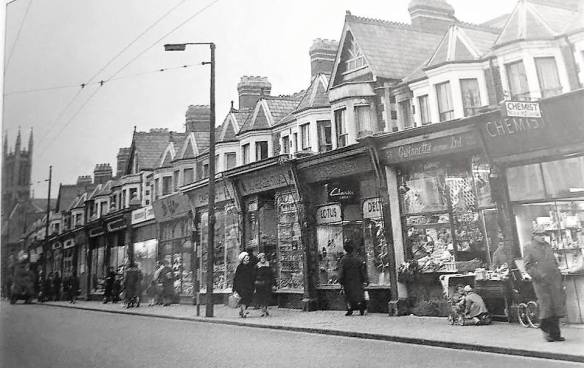 I must admit that Wellfield Road holds a special draw for me.  It’s where as a child I was taken to get my hair cut in Sam’s, where I was occasionally treated to a Thayer’s ice-cream, where I was taken into the china ornament shop under strict instructions to keep my hands by my side and not knock anything over or else I would have to pay for it, where Mr Clarke, the greengrocer, used to give me stamps to put in my stamp collection, and where I was allowed to spend my pocket money in Billy’s or Baker’s.  Ten years later as a teenager I would be spending hours in Ferrari’s bakery making a coffee and choux bun last for hours discussing world affairs or enjoying a late night chicken tikka masala in the Himalaya after an Allbright or two.

Some of Wellfield Road’s past has literally been uncovered this month.  Waterloo Tea are busy preparing their latest outlet at No.41.  It was most recently Ushi’s gift shop.  When the painter took away some of the old shop front and stripped away the paint what should be uncovered but the name H A Tilley, the name of the old shoe shop.  The signs are Waterloo Tea is going to preserve the old H A Tilley name.

June 2019 – uncovering the past. Shop being prepared for Waterloo Tea. 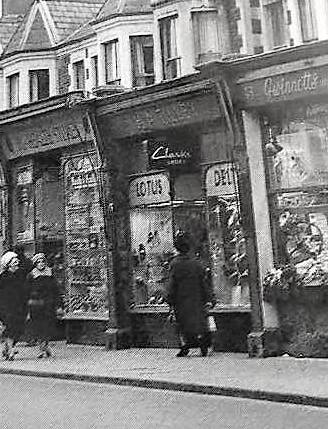 I’ve done a bit of research and found Herbert Arthur Tilley was born on June 29th 1911 in Newport, son of John Tilley, a gardener, and Alice Hannah Tilley (née Underwood).  In 1939 we find Herbert living on Sherbourne Avenue, Cyncoed together with his elder married sister Alice Doreen Lewis (b.1906).  Herbert describes himself as a boot and shoe retailer whilst Alice is a manageress of a shoe shop.  I’m guessing therefore that they may well have run the Wellfield Road shop together.  Alice passes away in 1984 in Cyncoed and Herbert died on May 28th 1993 in Bournemouth.  I can’t find any record of Herbert ever having married.

By all accounts Mr Tilley was a very nice man and a capable tennis player playing in a club in Rhiwbina.  He lived for some time on Llanederyn Road in one of those houses that had its own tennis court.

According to the Cardiff Trade Directories, the occupants prior to H A Tilley was a confectioners Brelaz & Williams.  Information on these occupants was somewhat harder to tease out.  Luckily in the past year, being part of our Society’s Research group, I have picked up some very useful tips.  And so with Pat’s help we have found the following: 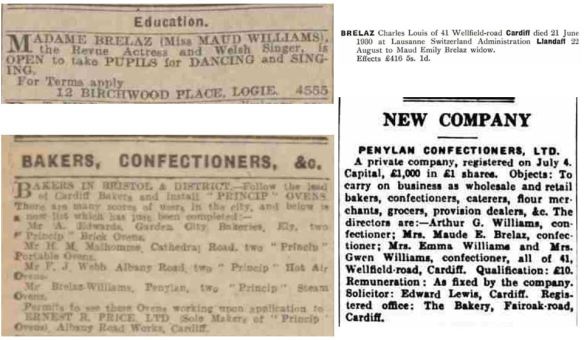 Maud Brelaz, nee Williams, was born in Cardiff and marries Charles Louis Brelaz in Dundee in 1923.  In 1925  we find she is advertising herself in the Dundee Courier as Madame Brelaz, Revue Actress and Welsh Singer, open to take on pupils for dancing and singing lessons.  By 1928 they have moved to Wellfield Road and opened a confectionery shop. In January that year the Western Daily Press reports they purchase two Princip steam ovens, manufactured just around the corner in Albany Road. In 1930 however Charles dies in Lusanne, Switzerland.  In 1933 Maud sets up a new company, Penylan Confectioners, with her brother Arthur and family.  We may even have found Maud staring in the 1916 silent film Grim Justice, but haven’t been able to prove that was the same Maud Williams as yet.

So how do we know all this.  Well for shopping streets in particular the very useful resource is Trade Directories.  Some of these are now appearing on-line but the easiest way to access them locally is in Cathays Library.  They tend to cover the period up to 1972.  There is another useful resource in recent years called the Goad maps.  They name every shop on a road in a given year.  The earliest I have found for Wellfield Road is 2006, again in Cathays library. 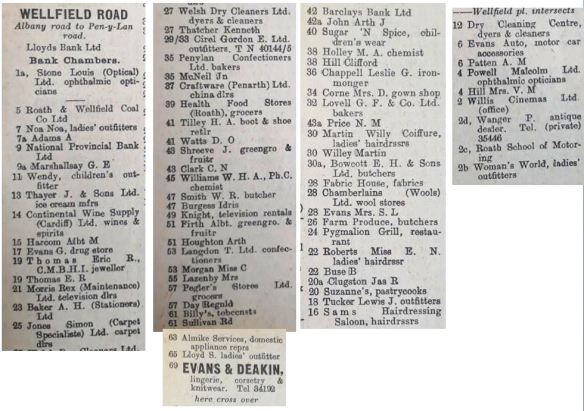 We do however have a 30 year gap between the mid-1970s and 2006 where information is harder to find.  This is where we would like your help.  Can you help us list the shops that were there in that period?  Any help much appreciated!  Many thanks.

Our Research group is looking to spend some time concentrating on Wellfield Road history.  It seems to make sense given that our Society meetings are held at St Andrew’s URC church hall.   I have started a web page on the History of Wellfield Road.  Hopefully, with your help, that will grow and begin to capture some more of the history of this fascinating street.

6 thoughts on “Uncovering the history of Wellfield Road”