A few weeks ago I spotted a postcard of Cardiff for sale on eBay.  It wasn’t your traditional postcard with a picture of Cardiff Castle, the City Hall or Roath Park lake.  This was a picture of a house, a seemingly ordinary house with nobody posing in front of it. The postmark was 1908. 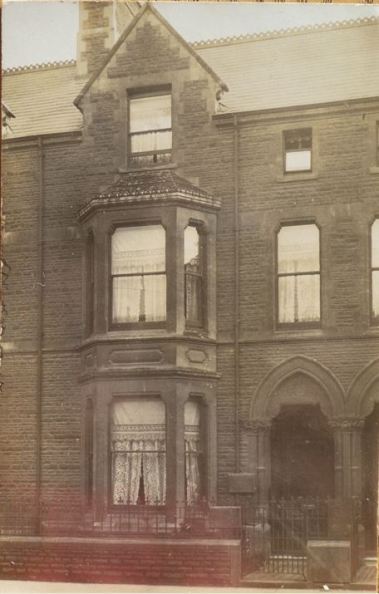 I tried to think about where in Cardiff the house could be but quickly realised it looked like so many houses in Cardiff suburbs built in the late Victorian period.  Let’s enlist some help I thought and posted it on the ‘Cardiff Now & Then’ Facebook page – it’s just the sort of thing they may like doing.  Suggestions of where the house could be flooded in.  Some of the streets mentioned are no longer in existence making checking problematic.   With the help of Google Street View however it was possible for me and others in the Facebook group to check most of them and discount many of the suggestions. 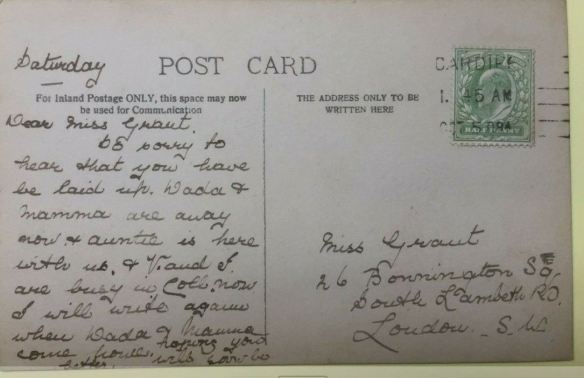 My eye was caught by one particular suggestion proposed by David Meek.  David was suggesting it could be 66 Albany Road, opposite his family-owned shoe business, itself of historical significance being one of the oldest businesses in Albany Road.  I examined the image closer.  It certainly looked a good match.  The ornate roof ridge tiles however didn’t match but that didn’t discourage me too much – ridge tiles are often replaced over time.

The fact that Albany Road is very much in the heart of our area of interest in Roath Local History Society led me to led me to entering a bid on eBay for the postcard.  In the meantime I set about examining the writing on the back. The card was addressed to Miss Grant of 26 Bonnington Square, South Lambeth, London.  I managed to find the Grant family at that address in the 1911 census.  Miss Grant was probably Edith Alice Grant, a blouse maker.  A bit more research revealed that Edith also had a sister, Bertha Grant, who in 1911 was living with her aunt and uncle in Monmouth.  Bertha is another possibility for the postcard recipient.

The final day of the eBay auction arrived and the minutes ticked down.  Lo and behold I won the bidding with my bid of £5.  To be honest I was the only bidder.  A picture of an anonymous house in Cardiff evidently didn’t pique people’s interest.

Whist waiting for the postcard to be delivered I looked again at the photo of the writing on the back of the card.  Working on David Meek’s suggestion that this was 66 Albany Road, I attempted to link it to the family living there in 1911.  In 1911 the house was occupied by the Phillips family headed up by Frederick Phillips, a dental mechanic, whatever one of those is!  Tantalisingly the family originated from London, though the three younger children had all been born in Cardiff.  Eliza, the mother-in-law, had even been born in Lambeth.  Try as I might though I couldn’t find any link between the Grant family and the Phillips family.

The Phillips family in 66 Albany Road in 1911.  Was one of these the postcard author?  I had my doubts.

The postcard arrived.  I immediately rushed upstairs and found my magnifying glass.  Bingo!  The house was number 66.  The image posted on eBay hadn’t been good enough quality to see this but now having the original in front of me I could examine it much better and see the number 66 etched on the front door window. 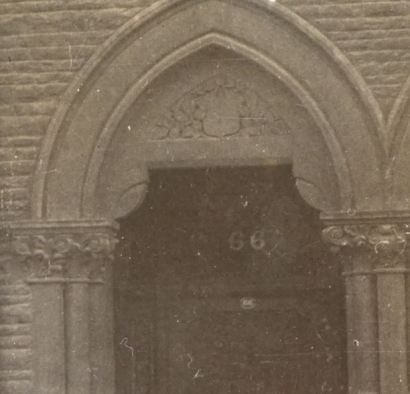 An enlarged view of the front door on the postcard

I still wanted further proof that I was looking at 66 Albany Road and not 66 in another street.  I set about examining the brickwork under the magnifying glass and comparing it to the enlarged Google Streetview image.  I discovered that in a few rows thicker bricks were used than in other rows.  And yes, those layers did match in both the postcard and the modern day.

A brick-by-brick comparison of today’s 66 Albany Road with the postcard picture.

That still left an obvious question.  Why make a postcard picture of a seemingly mundane house.  Almost out of desperation I conducted a newspaper search on “66 Albany Road” (Hint – if you haven’t used it yet, Welsh Newspapers Online is a great resource).  I struck gold and all was explained.  In 1908, 66 Albany Road was home to the St Alban’s School of Music run by Abraham N James.

Abraham N James was not shy in his advertising.  He advertised in London newspapers targeted at the Welsh ex-pat community living there. I’m guessing the postcard was just part of his advertising material.  I’m left wondering whether his pupils from far away also boarded in the house.

I started researching the James family.  Abraham Nehemiah James was born in Neath and married Mary Ann Price from Merthyr in 1887 and moved to Aberdare.  They had two daughters, Vida Annie Patti James (b.1889) and Florence Novello James (b.1891) both born in Aberdare.  The name Patti seems to be a nod to Dame Adelina Patti, one of the world’s great opera singers of the time who made her home in Craig y Nos in the Swansea valley.  Florence’s middle name Novello was a nod not to Ivor Novello but his grandmother Clara Novello, an acclaimed soprano singer.

Dame Adelina Patti and Clara Novello (photos: Wiki), who the James girls were named after.

So let’s have a look at the message on the postcard again.  The handwriting isn’t easy to read but my best guess is:

So sorry to hear that you have been laid up.  Dadda and Mamma are away now & Auntie is here with us.  V and I are busy in Coll now.  I will write again when Dadda and Mamma come home. Hoping your better. With love be (?).

Frustratingly there aren’t many clues there.  The V could be one of the daughters Vida.  Of course the writer of the postcard may have nothing to do with the James family.  The writer could be a pupil at the St Alban’s School of Music.  I even thought that Miss Grant could have been a former music teacher of the postcard writer.  Lots of possibilities there.

The house in the postcard has two plaques, frustratingly too unclear to read.

So what happened to the Abraham James and family?  In 1911 they had moved from 66 Albany Road to Waterloo Road in Penylan.  Abraham died later that year aged 62 leaving just £72 in his will suggesting that his music school may not have been a great money spinner.

In 1939, Vida James the daughter, is living at Roath Court Road and described as incapacitated but lives until 1969 when she was living in Langland on the Gower peninsular.   Florence James, possibly the postcard writer, married Albert Lukey in 1915 and lived in Winchester Avenue, Penylan, Cardiff.  She unfortunately dies ten years later in 1925 aged just 35.  Albert Lukey remarries in 1938 and dies in 1960 in Winchester Avenue.  The world can seem quite a small place still sometimes.  My grandparents lived in Winchester Avenue and my mother was born there.  They would have no doubt have known Albert Lukey and his second wife Dorothy.

So finally, lets return to the picture postcard.  This is probably one of the best pictures that exists of an Albany Road house before it was converted into a shop and therefore of historical significance itself.  66 Albany Road has had many occupants over time.  From 1937-1958 it was Glynne Jones a ladies hairdressers.  In the 1980s it was the jewellers Gold, Gold, Gold.  Nowadays it is occupied by CPS Estate and Letting agents.  The stonework looks lot cleaner than it did in 1908. 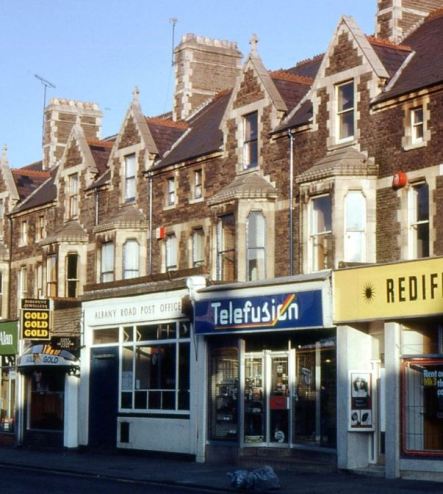 I wonder if you listen very very carefully when passing 66 Albany Road whether you can still hear the voices of budding operatic stars being put through their paces by Abraham Nehemiah James?

Too many bits and pieces were collected in researching Abraham James to include in the body of the article so I offer them here if you still have the staying power to read them. 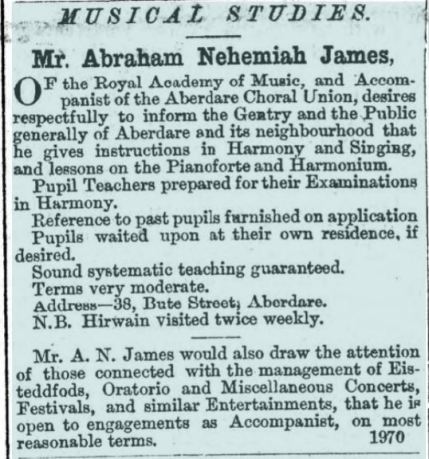 An early advertisement from Abraham James in 1879

Aberdare Times 1896 – before the James family moved to Cardiff

7 thoughts on “The Secrets of a Cardiff House slowly revealed.”