There can’t be many more evocative old shop names in the Roath area than Thayer’s.  Drop the name Thayer’s into any conversation you are having with a mature Cardiffian and soon they will be reminiscing about their favourite flavour ice cream or their preferred form whether it be cone or tub. 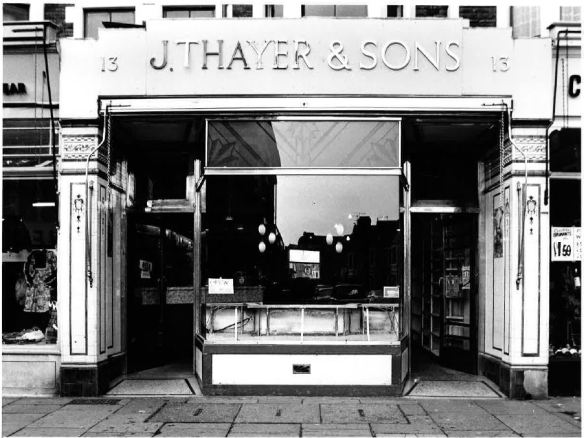 I was fortunate enough lately to meet John Thayer who kindly shared with me some of the history of the family business that centred around the shop in 13 Wellfield Road.

Thayer’s  dairy ice cream business was started by John’s father Albert Cyril Thayer. The Thayer family originated from Cwm in the Ebbw valley where Cyril’s father Joseph Thayer had owned a grocery business.  Joseph Thayer was born in Llanhilleth in 1888.  He originally worked at the colliery but following a serious flood, forcing him to leave his tools behind, he changed career, moved to Cwm and opened a grocery shop.

The Wellfield Road premises were purchased by the Thayer family just prior to WWII.  For ten years before that it had been a dairy shop owned by F.I. Day.  Cyril Thayer served in WWII and after coming out of the army, married Irene Jackson and opened Cardiff’s first self-service grocery store at 13 Wellfield Road.  What great foresight.  Who would have ever thought that self-serve grocery shopping would ever catch on! 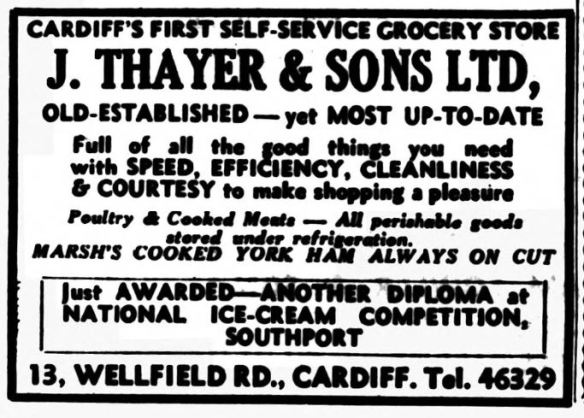 The business went on to be very successful.  Strong contacts were built up with local suppliers.  Eggs from Mrs Johnson’s farm in Usk and turkeys from another source, milk from a nearby dairy, being some prime examples.

Another example of Cyril Thayer’s foresight came later when he witnessed a nearby business struggling to make ice cream of high enough quality to sell and instead having to throw it away.  Cyril thought he could do better than that and the rest as they say is history.  Via their grocery business Cyril Thayer already had good access to the materials needed to make ice cream.

As the years passed competition in the self-service grocery sector increased but by now Thayer’s dairy ice cream was so popular that the shop business could be sustained on ice cream alone.  The back of the shop morphed into an ice cream parlour serving knickerbockerglories and sundaes and the front into an area to sell ice cream and cream to walk-in customers.  Queues could often be seen snaking back out of the shop and along Wellfield Road. 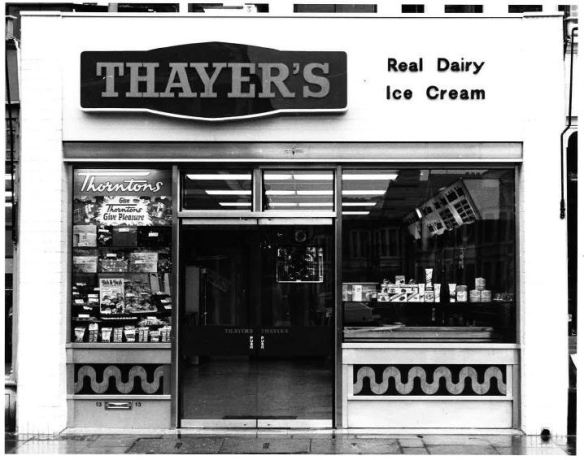 So what was the secret of Thayer’s dairy ice cream?  Quite simply it was good quality, honest, natural ingredients.  As well as milk and cream, ice cream is made from milk powder.  Whereas many other producers would cut costs, Thayer’s always used full cream milk powder in their formulation.  So here’s a scoop.  Here’s the recipe for Thayer’s ice cream which John can still remember to this day:

280 milk, 30 dairy cream, 125 butter, 125 full cream milk powder, 250 sugar, 25 glucose, 12 eggs, a bit of emulsifier and stabiliser thrown in but never any preservative.  I know what you are going to say.  There are no units quoted.  Well the units were kilograms but I thought if I put that in someone would try and copy it and end up eating ice cream for three years.  And no vanilla flavouring in there either, this was pure dairy ice cream. 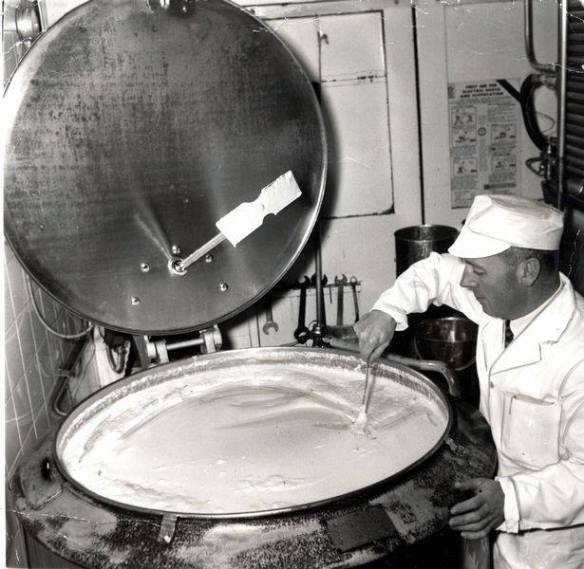 There were of course the various other flavours, over twenty in all.  Thayer’s strawberry ice cream was infamous.  The business used to use 14 tonnes of strawberries each year.  That’s an awful lot of strawberries.   Then there were the other favourites, chocolate, coffee.  And I’m sure I remember orange, or is my memory playing tricks there. 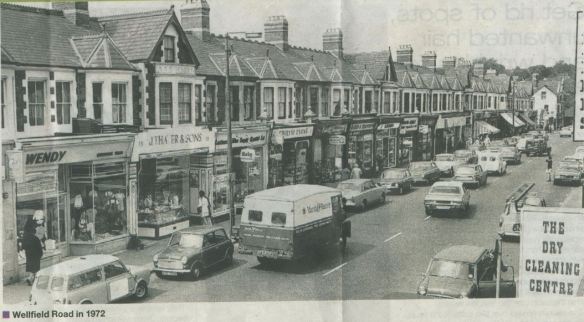 The very early ice cream making equipment in 13 Wellfield Road made no more than 2 gallons at a time.  More machinery was purchased to make larger quantities but eventually the time came when the company got so successful that other premises were needed.  In 1966 Thayer’s ice cream started to be made at a site in Wentloog Road, Rumney. 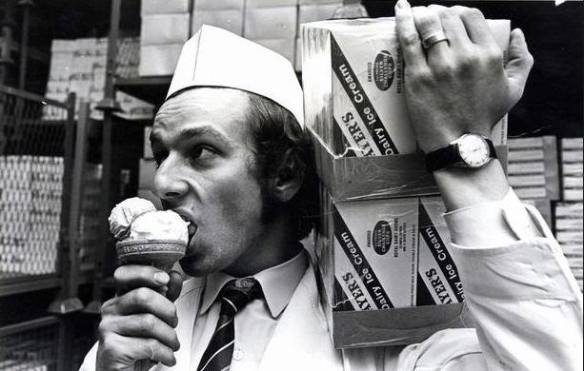 David Thayer at the Wentloog Road factory in 1975

By now Thayer’s were employing over 100 people, supplying their ice-cream throughout a sizable geographical area, mainly to the small traders such as corner shops.  A small fleet of 14 vans was used to supply the distribution network all efficiently choreographed using early Rediffusion computers.   There was even a small factory in North Wales in Llandudno that John used to visit weekly to supervise the ice cream making.

Thayer’s was very much a family business.  John recalls helping out in the Wellfield Road shop from a young age serving people such as Mr A G Meek who ran the shoe shop around the corner in Albany Road.  Over the years John and his brother and sister took an increasing role in the business and eventually took over from their father Cyril. John used his knowledge gained from studying  engineering at university to make the process more efficient whilst maintaining their superior quality. 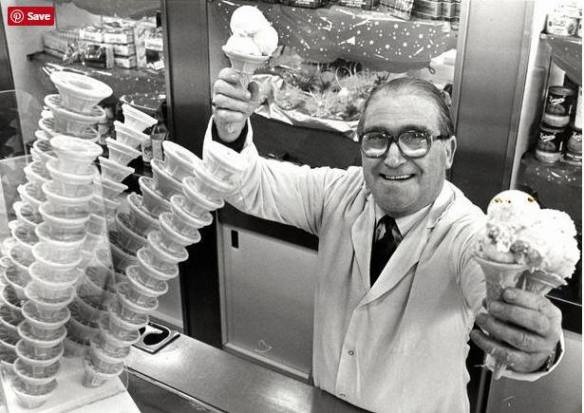 Bob Davies retired in 1987 from Thayer’s in Wellfielld Road after 27 years service. Bob, originally from Ruthin in North Wales, would often be heard speaking Welsh to customers.

However, all good things must come to an end as they say.  People’s shopping habits were changing and the corner shop outlets fast disappearing.  Margins were shrinking and the sad decision was eventually taken to sell the business together with the name.  It was purchased by Express Foods in the 1980s.  David Thayer, John’s brother,  does still have an ice cream shop in Bath trading under subtly different trading name of David Thayer’s Ice Cream Shop. 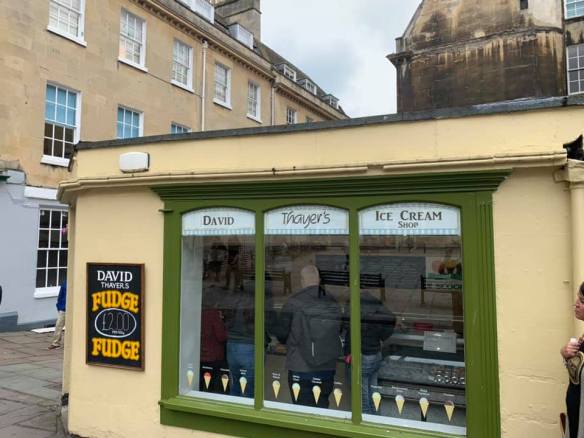 Cyril Thayer, the entrepreneur and perfectionist and man whose name is synonymous with one of Cardiff’s most famous brands, passed away in 2006. He was also a dedicated family man and devoted his later years of his life caring for his late wife Irene, who suffered from Alzheimer’s Disease, as well as raising awareness of the condition. 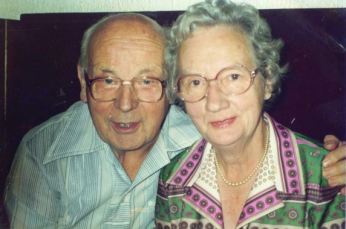 Cyril Thayer and his wife Irene 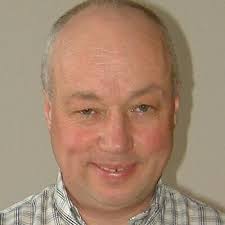 For me the name Thayer’s takes me back to my childhood.  For a special treat some weeks my grandfather would be sent down Pen-y-lan Hill to buy a block of Thayer’s ice cream whilst my grandmother was busy making dinner.  It would arrive back, carefully wrapped in newspaper to insulate it.  By the time dinner had been consumed the ice cream was in perfect condition, nicely soft around the sides and full of flavour.  Raspberry ripple was my favourite.  There were no freezers in those days so naturally the whole block had to be consumed in one sitting – such a hardship.

So I’ll leave you to reminisce, trying to recall if you were a tub or a cone person and what was your favourite flavour.