I’m a man who likes to know where he stands.  It wasn’t long after I joined the Roath Local History Society that I started to ask the question ‘Where exactly is Roath?’  Or to use the local vernacular, ‘Where to is Roath?’  It turns out to be a much more complex question than I originally imagined.  The answer to the question varied tremendously and ranged from ‘A large area, bigger than Cardiff itself’ to ‘Roath doesn’t exist any longer’, so I decided to look into it a bit more. 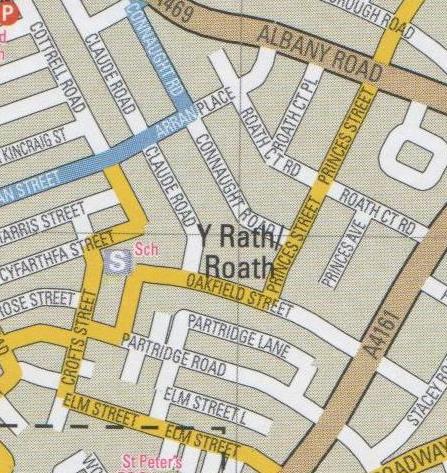 Roath on Cardiff Council cycling and walking map – but no boundaries

Back in the twelfth century I get the picture that Cardiff was basically the Castle stuffed full of hungry people who needed feeding, and Roath was their breadbasket…. and their dairy supply and anything else they fancied eating.  The manor house and home farm was believed to be on the site of what is now James Summers Funeral Home on Newport Road.  The mill was in nearby Roath Mill Gardens.

During the twelfth century sometime Roath fragmented into three areas, Roath Tewkesbury, Roath Keynsham and the charmingly named Roath Dogfield. But let’s just look at what those three areas of Roath covered in today’s terms.  Roath Dogfield included most of the town of Cardiff, today’s Roath, parts of Splott, Tremorfa, parts of Cathays, Butetown, Cardiff Bay and portions of Pontcanna, Grangetown, Llanishen and Lisvane.  Roath Keynsham included Pen-y-lan, Cyncoed and significant portions of Pengam, Llanishen, Thornhill and Whitchurch.  The area belonging to Roath Tewkesbury is unclear apart from it including St Margaret’s chapel but looking at it there wasn’t much left of what we now call Cardiff to go around.  You just get the feeling that if there had been a football team in those days it would have been called Roath Rovers rather than Cardiff Town.  It also seems like those guys in Cardiff castle certainly took a lot of feeding.

For anyone keen to grapple yourself with Roath and its early history I can recommend the book written by our vice chairman Jeff Childs, ‘Roath, Splott and Adamsdown – One Thousand Years of History’, as detailed on our publications page.  Alternatively there is a brief history given in The Story of Roath.

Jumping forward some 600 years to the 1700’s and the Parish of Roath has emerged as its own entity and seems to have shrunk.  It encompasses today’s Roath, Penylan as well as Splott, Tremorfa, most of Adamsdown and part of Cathays, and even edges its way into Cyncoed.  The parish boundary of Roath, visible on maps all the way from 1789 up to the 1920  appears not to change. 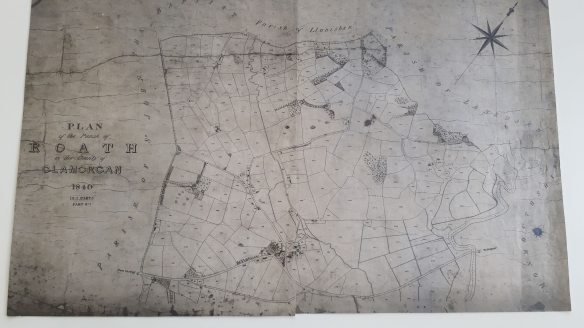 So let’s look in a bit more detail where the parish boundary is.  In the west the boundary defined by City Road, Crwys Road and Fairoak Road is easy to pick out.  Going south from City Road the boundary goes down Glossop Road and Meteor Street, cuts across Adamsdown Gardens before picking up Windsor Road and then East Moors Road and straight on into the Bristol Channel.  Overlaying the boundary on a modern map we find that only three quarters of Roath Dock would have been in the parish of Roath whilst Roath Basin would have been outside.

Jumping now to the north of the parish we pick the boundary up at the eastern end of Fairoak Road.  The parish boundary cuts north east to Cyncoed Road, up Cyncoed Road for a very short distance before going east, through what was Queen Wood and Well Wood and following Nant Pant-bach brook into the River Rhymney. From then on it’s easy. The parish boundary goes south along the River Rhymney into the Bristol Channel.

You’d have thought anyone with an interest in local history would be happy with that.  In a perfect world I would like to push the western boundary just a bit further.  After all what about all that history wrapped up in the Richmond Road and The Parade areas, and how did they manage to get left out of the parish of Roath? Then there is the western part of Adamsdown which includes Howard Gardens etc.  Can’t we argue a case for that too?  And I haven’t mentioned Roath Park Lake yet either which falls outside the parish.  You get the feeling that many places with Roath in the title are not in Roath at all.

So where exactly is the boundary of modern Roath?  Well, if you can tell me where that is you are doing well.  It appears as if I am not the first person to grapple with this slippery question.  Peter Finch in his splendid eloquent way tackles the question in one of his books.  Then there was a project that took a different approach and drew a chalk line around the boundary – theirs included Roath Park Lake.

The Roath boundary as many people would argue it? (Image Credit: The Cashmore Johnson Art Collective Roath Boundary Ramble in 2014)

Surly the Council must know I thought.  Then I discovered that there is no such area as Roath in terms of a council ward any longer, it has been absorbed into Plasnewydd and Pen-y-lan.  In fact looking at the history of the council wards sketched out in the map collection of the Cathays Heritage Library map collection is fascinating.  The Roath boundary seems to change regularly over the years before disappearing entirely.

Fear not folks.  Roath is still here and alive and well.  Pick up a modern Ordnance Survey map, an A-Z and even a Cardiff Council map of cycle routes and alike and Roath/Y Rhath is still there as bold as anything BUT with no boundaries marked.  That’s why I like the old parish map of Roath – I know where I stand with it.  But what is the old map showing me?  Is it the old ecclesiastical parish or the civil parish  of Roath?  Ahhhh – more questions than need an answer!

The name Roath lives on today, here in the form of some street art.