Our upcoming Lecture Programme has recently been published and kicks off on Thursday 13th September.  Details of the lectures can be found by clicking on the ‘Programme’ tab in the main menu.

Some of you who picked up an early print edition of our programme may notice a change.  Unfortunately, due to unforeseen circumstances, our original speaker for February 2019 is unable to make it.  Instead we welcome Peter Sampson who will talk on ‘The Story and History of Flat Holm Island’.  Peter’s talk will be especially welcome given that we had in fact been hoping to visit Flat Holm island in June as part of our Summer Visit programme but had to change plans following problems relating to a damaged landing jetty.

Apart from that little glitch our Summer programme of visits ran very well indeed, helped of course by the dry weather we are still experiencing.  We had six trips in total, all of a varied nature. 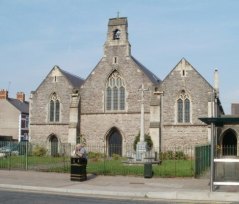 We started at St Saviour’s Church in Splott where the parish priest, Father Phelim O’Hare, kindly gave us a guided tour and pointed out some of the changes made to the church over time.  The church was consecrated in October 1888 and was originally a daughter church of St German’s church in Star Street. St Saviour’s has been remodeled over the years and the nave cleverly converted into a church hall.

The 1:10 scale model of the Newport Ship with the recovered timbers depicted in solid form at the bottom.

One of the highlight’s of the Summer programme was an afternoon trip to both Newport and Caerleon.  In Newport we visited the ‘Newport Ship’, the remains of this 35m long medieval vessel were discovered in 2002.  The ship was built in northern Spain and traded mainly between Spain and Portugal and southern Britain carrying cargoes as varied as iron and wine.  It is believed that the ship came to Newport in 1486 for repairs but it toppled over into the mud where it lay for over 500 years.  We were treated to a detailed description of the painstaking work involved in restoring and preserving the ship’s timbers.  We look forward to visiting again when the restoration work is complete.

Closer to home, the Society visited Cathays Branch and Heritage Library.  The library contains a host of resources for anyone interested in local studies in Cardiff.  Enthusiastic library manager Katherine Whittington talked us through their collections and resources including their on-line catalogue that can be searched at home.  I’ve since revisited the library in an attempt to answer that elusive question, ‘Where exactly is Roath?’ More on that in the future may be.

Highfields Church before and after restoration (Hisotorypoints)

A week after a hastily arranged visit to St Fagans National Museum of History it was time to visit another church, this time Highfields Church in Monthermer Road, Cathays.  There, Tony Cort gave us a tour and detailed talk on the history of the church buildings.  The church was originally Crwys Hall Methodist chapel built in the fashionable Arts and Crafts style and opened in 1900.  In 1906 the Pierce Hall, on the corner of Robert Street, was opened, named after Charles Pierce, a wealthy bachelor and retired magistrate from Bangor, who had donated a lot of the money for the church building.  In 1995 Highfields Church took over the building from what was then Cathays Presbyterian Church of Wales and began an extensive series of refurbishments but maintaining much of the original fabric.

For the last trip of the summer we went to Cyfarthfa Castle Museum & Art Gallery in Merthyr Tydfil.   This isn’t a castle at all but the former grand home of the Crawshay  ironmaster family.  Chris, our eloquent guide for the day, gave us a fascinating and entertaining talk on the history of the Crawshay family, the ironworks and the house as well as the museum collection.  The view from the house today is green and picturesque and no doubt looks very different to the Crawshay days when he overlooked his iron works which were one of the largest in the world making him in turn one of the most wealthy industrialists in the world.  Entrance to the museum and art gallery is just £2 whist entrance to the extensive grounds is free of charge.

Looking forward to seeing you at our upcoming lectures.  In the meantime, enjoy the Summer!