The area we know today as City Road was once an insignificant strip of land created in medieval times when the ecclesiastical boundaries of Roath and Cardiff were drawn up by the Church.  The area began as a narrow, uneven muddy dirt track, the western side of which lay in the small parish of Cardiff and the eastern side in the hamlet of Roath.  The middle of the track was disowned by both parishes and consequently was severely neglected for hundreds of years, hence its name of Plucca Lane, (Plucca is Welsh for muddy).  The alternative spelling of Plwcca is also used sometimes.

1789 map of Roath with Plwcca Lane marked with a dotted line towards the left and side. Note the milestone marked near the Elms (still in the grass by the old Roath library)

The dirt track ran from the Long Cross, a tall boundary cross placed by Payne De Turberville which originally stood near the junction of what is now Newport Road and City Road, to heathland to the north of both parishes.  The surrounding area of land was also once muddy uncultivated land, where rushes originally grew hard by the lane and mats were made of them and sold in the town for domestic purposes.

For hundreds of years, outside the northern end of Plucca lane between the boundaries of Cardiff and Roath was an area used for executions.  It isn’t known whether gallows were a permanent structure on the site, but in relation to other areas there were not that many executions over the years, so it is likely that a temporary structure was used each time, possibly using the cart that the prisoner was conveyed in.  The condemned would be tethered to a wooden frame and dragged behind a cart from the gaol in St Mary Street or the Castle through what is now Queen Street, to Newport Road, then left into City Road and up to what is now the junction of City Road, Albany Road, Richmond Road and Mackintosh Place.  Depending on the sentence, the unfortunate would be hanged until dead, or hanged drawn and quartered whilst still alive.  The remains would either be left there to rot or taken away by relatives for secret burial.  Public executions ended in 1868, and from then, the condemned were executed within the prison walls.

Plaque on the side of the Nat West bank on Crwys Road marking the site of the gallows.

1800: Plasnewydd Mansion was built around this time

1801: The Common heathland to the north of Plucca Lane was enclosed and the parcels of land sold off by Cardiff Council often at a loss.

1830:  The habitation at this time consisted of Roath Castle and six small cottages in two fields.

1839: The first Bute Dock was built by the second Marquess of Bute and the need for housing set loose a tidal wave of housing development that would change the face of Plucca lane and Roath entirely.  But development of Plucca Lane was hindered by constant disagreement between Cardiff and Roath Health boards.  It had been agreed by both sides that the developers were initially responsibly for improving the pavements and putting in kerbs, but when a complaint was made about the developer’s failure to put in kerbs their side of the road, they responded by saying that the council had not produced their plans showing how high the pavement and kerbs should be.

1840 Tithe Map of Roath with Plucca Lane running from top to bottom in the centre.  Plasnewydd (later called the Mackintosh) is seen leading off Plucca Lane

1856: At a Cardiff Board of Health meeting, Councillor John Batchelor (who at the time lived at Talworth House in Plucca lane) complained that there were now 30 houses in the lane and they were all without street lamps.  Charles Crofts Williams from Roath Health Board replied that he supposed that the poor gas company would have to bear the cost of installing lamps, and Batchelor retorted that the poor gas company could afford to erect splendid houses at their works.

To be sold at auction by Mr Abbott.

At the Queens Hotel on Friday 28 August 1857, two substantially built semidetached villas situate and being nos 12 and 13 Plucca Lane in the Parish of Roath.  Consisting each of four bedrooms, two parlours, large kitchen, with cupboards and good scullery, walled garden, 145 feet from front to back entrance, supplied with water from the company’s main.

They are neatly fitted up with iron palisading and grass plot at front. Held on lease for 99 years. Ground rent £7.14 s.

Nos 14 and 15.-Same but with excellent spring water pumps to each villa.

Every care has been taken fitting up the above villas. Excellent opportunity for those at the Bute Docks as it is situate in a direct line and easy walking distance from there.

They are a few yards from the Turnpike Road in consequence of which avoid unpleasantness of the dust.

Residence in that healthy and delightful neighbourhood is much sought after, but cannot be abandoned by all who seek them.

The auctioneer went on to say that interest has been secured on three of the houses of which two have been let to respectable tenants at £20.00 per year and the other being a corner shop and bake house.

1857:  John Batchelor sent a letter in March to the Chairman of Cardiff Board of Health as he was unable to attend in person.  He complained of the disgraceful and almost impassable state of Plucca Lane and the offensive state of the ditches either side.  He said that the road is in such a condition that it is dangerous to life and property and the ditches of such a character (so many houses draining into them) that when Spring rains shall have ceased scouring them, they will be detrimental to public health.  The surveyor was ordered to repair the lane and the inspector of nuisances to prevent privies from being emptied into open ditches.

1858: Advertisement in local newspapers on 6 February 1858 from John Homfray Esq

To Colliery and Distillery Proprietors, Timber Merchants and Others:

1861:  Mr Dalton, the Clerk of The Peace issued a legal statement that Cardiff Local Board of Health had to repair 598 yards commencing at the old Turnpike gatehouse in Newport Road and running down the lane, the remaining portion of the lane was to be repaired by Roath local Board and Parish of Roath.  There were now 19 inhabited houses and 9 uninhabited houses in the lane, with plans for more residences being submitted.

1863: Houses in Plucca Lane are numbered in September that year.

1865: Development had started at the Newport Road end of Plucca Lane but there were still major problems in the rest of the lane.  In the winter the path way was impassable because it was knee deep in mud and during the summer one would be covered in dust.  In some places the pathway was 12 feet higher that the cart track and in others about a foot lower where stagnant pools of water lay.

Scavengers carts were employed to clear up the rubbish thrown out into the streets by the residents but they rarely visited Plucca Lane as the contractors said it was optional whether they came or not to this lane.  Complaints were often made by residents that the water carts employed to dampen down the dust in Summer, were seldom seen in the area.

A rate payer complaining to the Cardiff Times in February that year said that the Cardiff Surveyor had recently been seen inspecting the conditions in the lane but had only ventured as far as the Canteen (a wine merchants not far from the southern entrance) before making his retreat.

1874: After finally receiving thoroughfare status, Plucca Lane ditched its notorious name and was Officially named Castle Road in deference to the nearby mansion known as Roath Castle, formerly Plasnewydd.

1880 map of the northern part of Plucca Lane, again marked with a dotted line indicating the Cardiff-Roath boundary. The four-way junction near the top was later to become a five-way junction when Mackintosh Place was built. (map from Old-Maps.co.uk)

1883: The narrow entrance to Castle Road from Newport road is improved and widened by the demolition of Longcross House which was by now an eye sore on the corner of the junction. 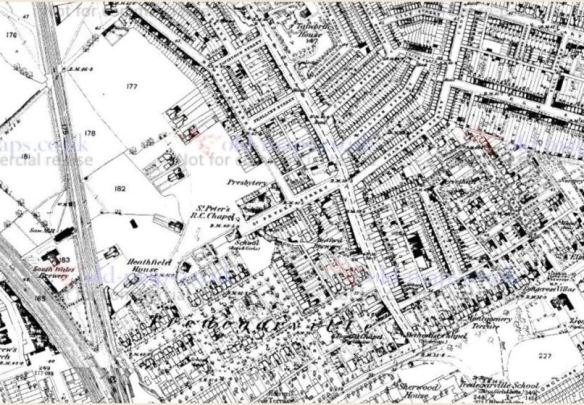 1880 map of lower Plucca Lane.  St Peter’s church now built.  Talworth House still standing on Plucca Lane (top of map).  At the bottom of the map can be seen Tredegarvillle School built but the Infirmary not yet built.

1889: There were now 154 properties in Castle Road, 101 of which were also commercial enterprises and 53 were private residences. 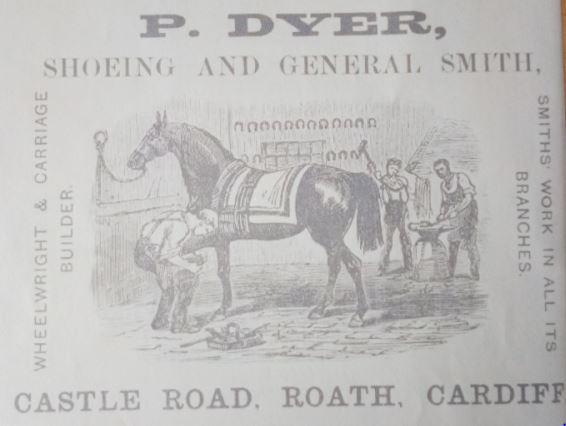 Thank you to one of our members Pat Jones for writing this article.

2 thoughts on “The early history of City Road, Cardiff”