We had an enquiry in recently asking if we knew anything about the crew members of the Cardiff steam trawler Miura which was shipwrecked off the coast of Cornwall in March 1927.  The short answer was no, but it raised so many interesting questions it prompted me to do some research.  So many things came as news to me.  I hadn’t realised that Cardiff even had a trawler fleet; I’d always associated the port with coal-exporting.  I also hadn’t realised that trawlers were at one stage steam-powered.  To use the modern vernacular – my bad.

What had prompted the enquirer to contact us was the fact that their grandfather had been involved in the rescue mission that saw five of the twelve crew survive.  Not only that but her grandfather had then named his recently born daughter Miura.  The enquirer was particularly asking about P Kennedy, the second-engineer, from Roath, a man the grandfather had helped up the cliff that stormy March night.

More about P Kennedy later but first I wanted to discover more about the trawler and it’s ties with Cardiff.

The 274 ton trawler Miura belonged to the Neale and West company headquartered in Bute Docks, Cardiff.  Their fleet of twelve steam trawlers were based in Cardiff and Milford Haven.

Let’s start by looking at the owners of the trawler company.  Neal and West was set up by two fish merchants in Cardiff in 1885.

Joshua Neale born in County Antrim, Ireland to English parents.  He sounds quite a remarkable character.  He was largely self-educated having left school at the age of twelve.   He taught himself languages and had a passion for natural history.  He also had a lot of physical strength and excelled at many sports including rugby and cycling.  His knowledge of natural history led him to become a member of Cardiff Naturalists and then their President on two occasions.  He wrote a number of papers on natural history, the early ones based on species landed by the firm’s trawlers. More about the life of Joshua Neale can be found in this post from Cardiff Naturalists. 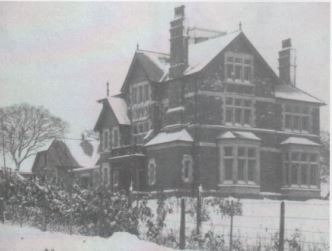 The other partner in Neale and West was Henry West.  He was born in Leek, Staffordshire in 1858 and grew up in Bristol before moving to Cardiff and living in Roath.  In 1891 he lived in Castle Road (now called City Road) and describing his occupation as a fish merchant.  By 1901 the family were living at 42 Ninian Road. He left the partnership in 1910 although the company continued to trade under the name of Neale and West.  In 1911 the West family had moved to Woodlands, Ty Gwyn Road.  He was by this stage manager of the Cardiff Ice Company, no doubt supplying ice to his former trawler company.  He was also a great sportsman an shared a passion for cycling with his former partner Joshua Neale. When he died in 1942 his address was Broadhurst, Ty Gwyn Road.  His will specified which of his grandchildren were to receive his sporting medals and cups.

It sounds like when Joshua Neale and Henry West set up their fish merchant business in Cardiff in 1885 they struggled with the supply of fish.  There were no trawlers operating out of Cardiff at the time but instead a few tugs would take trawling nets out into the Bristol Channel and catch what they could.   In 1888 the Neale and West company decided to buy their own trawler. The business grew and the company that operated out of the West Bute Docks eventually owned over a dozen steam trawlers.  The company became involved in training Japanese trawler men and as a result started naming their ships with Japanese names.  This would explain the origin of the name for the Miura.

The Miura which sank off the coast of Cornwall in 1927 was in fact a replacement for another Neale and West trawler of the same name.  The original Miura was built in Middlesbrough in 1911 but only fished for three years before it was acquisitioned by the Royal Navy for use as a WWI patrol boat.  On 23 Aug 1915, the original Miura was sunk by the German submarine UB-2, off Great Yarmouth.  Eleven lives were lost. Read more at wrecksite.  It was one of seven Neale and West requisitioned trawlers to be sunk in WWI.

A replacement vessel was constructed  in Middlesbrough by Smiths Dock Co Ltd in 1916.  As WWI was still underway it was immediately requisitioned again by the navy initially as a minesweeper and then as a hydrophone vessel (fitted with underwater listening equipment that could detect submarines).  Fitted with deck guns, Miura continued in war service until 1919 when the ship moved to its original intended use fishing out of Cardiff.

The Miura set out from Cardiff on 18 Mar 1927 with twelve crew on board for a fishing expedition to the south coast of Ireland.  It was due back in Cardiff on 30 Mar.  It never returned.

It was skippered by William Joyce, his first trip out as skipper of the Miura though he had previously acted as skipper’s relief frequently.

On its way back to Cardiff, no doubt laden with fish, the Miura ran into dense fog and then high winds off Cornwall.  The Miura struck rocks at Stanbury Monk, eight miles north of Bude, at 11.45 at night on 29 March.  For 45 minutes the wireless operator sent out SOS calls but then the Miura heeled over to port and the wireless ceased to function.  With the engine and wireless out of action their situation seemed helpless.  Five men lashed themselves to the mast and others were lost overboard.  Two of the five decided to try and swim for the shore.  After spending and hour and a half in the water the wireless operator managed to swim ashore in heavy seas, clamour up the cliffs and make it to a farmhouse.  The Bude Rocket Brigade was summoned and the rescue operation initiated.

Mr Kennedy (2nd engineer) reported: “We climbed the rigging to the masthead light, and I clung there. We shouted to the others to join Wilkinson, Bridge, Melhuish and myself, but they could not get along. The last person, I think, to go over was the third hand, Thompson. He said ‘I’m finished’, and disappeared. After daybreak we saw a couple of fellows waving to us. Wilkinson dropped over and made for the rocks, and I followed. A big sea came along, and I swam blindly for the shore. I was weak and cold and rolled over and over, striking small rocks all the time. Someone pulled me out.”

Five of the twelve crew survived the shipwreck but seven perished.  One of the anchors from the Miura was recovered in 1979 and is on display in Bude.  This March saw an exceptionally low tide when it was possible to see what is believed to be the boiler from the Miura still in the sea.

Details of the Miura and the night it ran around have recently been researched by Julie Satchell and published on the budeandbeyond website.

The Miura hit rocks at 11.30 at night on Tuesday 29 March. The rescue of the survivors took place on them morning of 30 March.  By Thursday 31 March the Western Mail was carrying an article about the shipwreck, listing the crew and had reporters visiting the addresses of the widows. By Saturday April 2nd the paper was already reporting the findings of the inquest.  We tend to forget how quickly things happened back then.

I have researched the four that were from the Roath/Splott/Tremorfa areas: 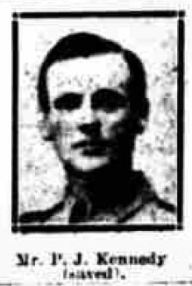 The first bit of luck I had was finding a newspaper report about the wreck that mentioned Mr Kennedy and some key facts about him.  He was Mr P J Kennedy and came from Great Yarmouth, used to be  boxer when young and served in WWI in Mesopotamia and he was married and lived in 119 Arram Street (presumably a mis-spelling of Arran Street).  Using that information I was able do some research and piece together some of his life story.

By 1907 the family had moved to Great Yarmouth where Philip attended Northgate Boys School. The 1911 census shows Philip, then aged 15, working as a grocers errand boy. Phil evidently took up boxing as there are a few reports in the Yarmouth newspapers of his boxing matches.

I haven’t found any documents as yet relating to Phil fighting in Mesopotamia in WWI.  His younger brother, James Vincent Kennedy, was however killed in Mesopotamia on 21 Apr 1916 whilst serving with the 2nd Battalion, Norfolk Regiment.

On 7 Jan 1920 Philip James Kennedy marries Winifred Maskery at Great Yarmouth Parish Church. Philip at the time describes his profession as a labourer.  In June 1920 Phil joins the Merchant Navy where he is to have a long career.  He and Winnie move to Roath, Cardiff and are living at 119 Arran Street when Phil was survives the shipwreck of the steam trawler Miura in Cornwall in 1927.

Tragedy was however to strike Phil six years later as his wife Winnie died in Sept 1933 aged just 33.  They appear not to have had any children together.  A newspaper report of her funeral says they were living in 89 Donald Street, Roath Park at the time and Philip was working for the Neale and West fleet.  His brother Pat Kennedy attended the funeral.

In Sept 1939, at the outbreak of WWII, Philip, listed as widowed, is living in Fulham, London and working as a Plant Attendant for Fulham Power.  At the same address is Ethel Kennedy (single), a music hall artist.  I am thinking Ethel may be a cousin or some relation of Phil’s.

Phil Kennedy goes back to working in the Merchant Navy for there are identity cards from 1955 with his picture on.

His will leaves his estate to John Kennedy, of Wokingham, Berkshire,  his nephew, who I think was a son of Phil’s brother Patrick

Alfred Melhuish was born in Crediton, Devon on 24 Jun 1895 to William Melhuish, an agricultural labourer,  and Ellen Melhuish née Burridge, both originally from Cheriton Fitzpaine, Devon.

Alfred moved to Cardiff and marries Matilda Blanche Randall from Splott, Cardiff in 1923. They go on to have five children together, two born prior to the Miura disaster and three afterwards.  The 1939 Register records that Alfred Melhuish still working as a deck hand fisherman and living in Carlisle Street.  He died in 1954 and is buried in Cathays Cemetery.  His wife Matilda passes away in 1976.  Her address in the 1901 census was Carlisle Street, Splott as it was when she died in 1976.

In 1911 he was living in the family home and working as a fish-dock labourer.

He married Susannah Elizabeth Osborne in 1924 in Haverfordwest, Pembrokeshire.  She was a daughter of a fisherman and had been born in Great Yarmouth.  They moved to Cardiff shortly after getting married.  Their son William James Joyce was born in Cardiff in 1925 but sadly died the following year. In 1927 at the time of the Miura tragedy William and Suannah Joyce were living at 101 Arran Street. 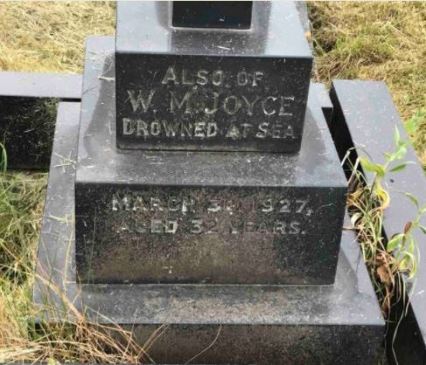 Bert Collins was born in 1894 in Blackwood, Monmouthshire to Alfred Collins, a School Attendance Officer originally from Milford Haven and Martha Emma Collins née Saunders originally from Haverfordwest.  In 1901 the Collins family had moved back to Milford Haven and the 1911 census shows Albert Collins, aged 16, working as a fisherman. He married Margaret James in Haverfordwest in 1916.

The death of Bert Collins was also felt by the Melhuish family.  Bert’s sister Edith was married to James Melhuish, brother of Alfred Melhuish, a deckhand and survivor on Miura. In fact it seems James Melhuish was probably the former skipper of the Miura.

In World War II the whole Neale and West trawler fleet was again requisitioned by the Royal Navy leaving Cardiff with no operating trawlers.  Some of the vessels were lost as a result of war action.  After the war the fleet was rebuilt by purchasing second hand Hull and Grimsby trawlers.  By 1956 however fishing out of Cardiff had ceased as fish stocks in the area depleted, but the company still operated out of Milford Haven for some years afterwards.

Miura trawler anchor on display in Bude (pic Bude and Beyond)